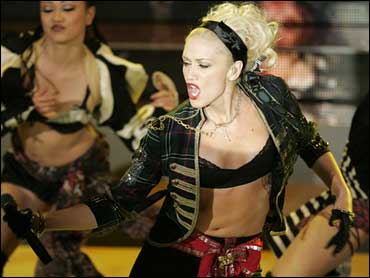 Luxury yachts and tricked-out cars. P. Diddy and Gwen Stefani. And lots and lots of water.

MTV announced Monday that its Video Music Awards will feature all of those elements next month as it seeks once again to reinvent an awards show that routinely lures big stars and makes racy headlines.

Punk rockers Green Day led all musical acts with eight nominations, Stefani and Missy Elliott followed with six and U2 with five.

P. Diddy will host the Aug. 28 awards show, which comes at the height of Miami's steamy summer and peak of hurricane season. He swooped in to Monday's beachfront announcement on a jet pack, landing on the sand and walking to the podium.

Wearing a white suit and a gray shirt with no tie, he promised that the show would include scene-stealing stunts like in the past. While there was plenty of sex appeal last year, there was little shock value compared to the 2003 show that featured the infamous Madonna-Britney Spears kiss.

"I'm going to tell the artists that if you want to get naked and run across the stage, go ahead and do it," P. Diddy said.

Besides Green Day, scheduled performers at the AmericanAirlines Arena overlooking picturesque Biscayne Bay include Kanye West and Kelly Clarkson. Also, for first-time, the VMAs will be scored with original music composed by Mike Shinoda of Linkin Park and hip-hop producer Lil Jon. West and Clarkson announced some of the nominees Monday.

Water will be the show's theme, and MTV promised to create the most elaborate water effects ever produced in an awards show. The water show will be engineered in the arena by the same production company that erected the fountain in front of the Bellagio Hotel in Las Vegas.

"It could be a gigantic waterfall in the arena. It could be remote performances from pools around Miami," said Dave Sirulnick, the show's executive producer.

Celebrities once again will pull up to the bayfront arena in gleaming yachts.

But they will receive competition from other stars who will arrive in souped-up cars for an auto show on the red carpet. As the celebrities arrive, viewers will get tours of those cars from the talent themselves.

MTV President Christina Norman said: "Every year we have to outdo ourselves and this year is no exception ..."

This year's show promises to be different from last year's, when politics played a part because of the presidential campaign: The daughters of Democratic candidate John Kerry and President George W. Bush made appearances to urge people to vote — and were roundly booed.

Green Day's eight nominations include six for their socially conscious song "Boulevard of Broken Dreams" and two for the "American Idiot," which also is the name of their critically acclaimed album.

MTV and CBSNews.com are both owned by Viacom.