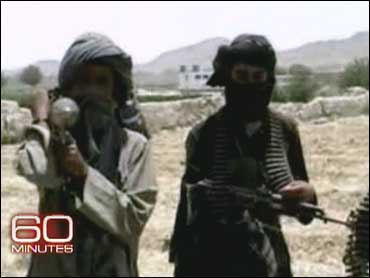 With all the focus on the war in Iraq, we don't hear much about the war in Afghanistan any more, even though the U.S. is fighting the Taliban nearly seven years after they seemed to be defeated.

And we hardly ever hear from the elite, secretive U.S. Special Forces who are leading that fight. But a Green Beret team wanted to talk to 60 Minutes to honor the men they lost when they were ambushed by hundreds of Taliban fighters two years ago.

Not since "Black Hawk Down" in Somalia have we heard a story of a small band of elite American soldiers who were so badly outnumbered and fighting for their lives.

This is a story about valor. But it's also a wake-up call about the growing strength of the enemy in Afghanistan.

From behind enemy lines, a Taliban camera captured pictures of the fighting, which started at sundown on June 23, 2006.

The battle, over two days and two nights, took place in a small village about 12 miles southwest of the city of Kandahar. The Green Berets, just nine of them, went into the village with eight other American and 48 Afghan soldiers. They were on a mission to capture or kill a Taliban commander known to operate in the area.

Maj. Ford says he didn't know hundreds of well-armed, well-supplied hardcore Taliban were waiting to ambush his men. American forces were accustomed to quick hit and run attacks by the Taliban, but Ford and Sergeant Brendan O'Connor say they were shocked by the sustained, organized assault in the village.

"We had not seen this disciplined execution of infantry tactics," Sgt. O'Connor explains.

"And you had never experienced anything like this?" correspondent Lara Logan asks.

"Not to this extent," Ford says. "We also started taking mortar fire into the patrol base, which also demonstrated that there was somebody who knew about the weapons system and how to operate it."

"So that was a sign that this was going to be different?" Logan asks.

At one point, the Taliban even broke through the Green Berets' perimeter, but were pushed back. Maj. Ford called in air support. But the bombs couldn't stop the Taliban - they were everywhere.

Using an unmanned aerial vehicle as their eyes in the sky, the Green Berets located a compound near the town graveyard that they suspected the Taliban were using as a command center.

Team Sergeant Thom Maholic led a small group of men from the Green Beret patrol base to the compound, a third of a mile away. The Taliban pulled back, but a short distance away they were dug in with machine guns.

"There was enemy located in three different positions in this irrigation ditch," Ford remembers.

The machine guns opened fire on Staff Sergeant Matthew Binney, who had split off to provide cover for the assault on the compound. "I got hit in the back of the head…by a round. Knocked me to the ground," he remembers.

The bullet fractured Binney's skull. "I didn't hear anything. It was just the loudest buzzing I'd ever heard out of both ears. Any my vision was real blurred as well," he remembers.

Despite his injuries, Binney, who was the team medic, got up and kept fighting. "That's when I was hit the second time. Went through my shoulder," Binney says.

Binney had no shoulder left. "It wasn't connected structurally anymore," he explains.

Then, a U.S. soldier who was with Binney, Joe Fuerst, was hit by a rocket-propelled grenade and seriously wounded. The Taliban managed to get within shouting distance of the two wounded Americans and started taunting their Afghan translator.

"A lot of the things that the Taliban were yelling at them while they were shooting at each other was that, 'Hey, you're a fellow Muslim, we can forgive you, just put your weapons down and walk away. We want the Americans alive,'" Ford remembers.

Over the radio, the translator, named Jacob, told Ford the situation was so dire that he was prepared to kill the two wounded Americans and himself just so they wouldn't be taken hostage.

"He said that he was willing to make sure that both of them were killed. And that he would kill himself so that nobody would be taken alive by the Taliban. Because he understood what would happen if they were to capture 'em," Ford says.

Asked what he said to that, Ford tells Logan, "I told him not to. I said, 'We've got people coming.'"

But Maj. Ford says his small team was scattered around the village, and under attack from hundreds of Taliban. The relentless, intense sound of the fighting was captured when one of the Green Berets' cameras was accidentally knocked on.

The camera captured the sound of fighting, the machine guns and the grenade launcher.

"We're completely surrounded by Taliban," Ford remembers, hearing the recording. "Every position, the patrol base, the compound."

"So you guys were in real trouble at this point," Logan asks.

Afghan reinforcements tried to reach the village but were pushed back by the Taliban.

The Green Berets could have been overrun were it not for individual acts of heroism by members of their team. Sergeant First Class Abram Hernandez was teetering on top of a ladder he had climbed at the corner of a building to get a clear shot at the Taliban fighters trying to take Matthew Binney and Joe Fuerst prisoner.

"You were hanging on that ladder, high in the air, holding on with one arm, shooting with the other arm," Logan remarks.

"Because I lost my balance. That's why," Hernandez explains.

But he held on.

"Seeing Hernandez propped up at that ridiculous angle was absolutely inspiring," says O'Connor. "You could see the tracer rounds actually flail the wall in front of him. And he'd duck down and then pop back up and tracer rounds were coming, they were whizzing right by our heads."

"Were you amazed by Hernandez, what was he was doing?" Logan asks.

"Brendan says he's never seen anything more inspiring or motivating than that moment when he laid eyes on you," Logan tells Hernandez.

"And I'd say the same thing about him," Hernandez replies.

While Hernandez was firing from the ladder, O'Connor started to crawl under fire across an open field to rescue the two wounded Americans. With no cover, his thick body armor made him an easy target.

"I actually pulled back to cover, to a covered position and removed my body armor," O'Connor remembers.

O'Connor says he couldn't get low enough, and was still under fire. "There was exchanges of fire going on at all times," he remembers.

Maj. Ford said everyone watching O'Connor crawl 90 yards across the open field without his bullet-proof vest couldn't believe what he was doing.

"They described to me watching the machine gun fire go right over his body, seein' it hit grass that he was crawlin' through and seein' it mow some of that down, the fires were so heavy it was literally cutting some of the grass in different spots," Ford explains.

It took an hour and a half for O'Connor to reach Fuerst and Binney. From a rooftop, Master Sergeant Thom Maholic was single-handedly holding down a group of advancing Taliban who were threatening the rescue operation.

"They were coming to take that compound that Thom was holding. And he would stop them by killing them or wounding them. And eventually they gave up their assault," Ford explains.

"Did Thom make it possible for you to get out?" Logan asks O'Connor.

Asked if he couldn't have done it without him, O'Connor says, "Absolutely not."

Then Maholic took a bullet in the head. Abram Hernandez rushed to his aide but there was little he could do. Maholic died in his arms.

Joe Fuerst also died as Sgt. O'Connor tried to carry him to safety. At this point, other members of the team, including Staff Sergeant Brandon Pechette, began to think no one would make it out alive.

Asked if he was afraid, Pechette tells Logan, "I was, at a point. There was a lull. When I heard that Thom Maholic and Joe had passed it was kind of a point where we're like, 'Well, we're still surrounded, you know? What are we gonna do? Well, we'll keep fighting.' So, I pull out a notebook. Wrote a little quick note to my wife. Said goodbye and said, 'Well, if I'm goin', I'm takin' as many as I can with me. And we're gonna fight as bravely as we can.'"

After nearly two days of fighting, two men lost and one seriously wounded, the Green Berets were almost out of ammunition.

Apache gunships were continuing to hammer Taliban positions, but the Green Berets were still surrounded. To get them out, they asked one of the pilots flying overhead to lay down an infrared beam that they used to guide them through the dark back to their patrol base. The plane fired at anything moving outside that infrared beam.

Ford says the beam could be seen on night vision, but not by the naked eye.

"How far did you have to travel like this?" Logan asks.

"Have you ever seen that done before?" Logan asks.

In a propaganda video, the Taliban showed off Matthew Binney's body armor as a war trophy and claimed victory, even though they lost an estimated 120 men in the fighting. But they surprised the Green Berets with their skill on the battlefield.

"The Taliban want to take Afghanistan back. They want to install their government, their system of life," Ford says.

"But, bottom line, a force that was defeated in the invasion is no longer defeated," Logan asks.

"Not at this time," one of the soldiers replies.

"But people will watching this how - wondering how did we get to this point? When this is the army that literally ran from U.S .forces. And now we're fighting them on this scale?" Logan asks.

"The kind of training that you use," Logan remarks.

"And now I'm sitting here and you're talking about a force that not only uses American style combat and infantry tactics, but is able to engage America's finest warriors," Logan remarks.

"That's correct," one of the soldiers replies.

At an emotional ceremony in Kandahar, the Green Berets honored the two warriors they lost in the fighting, Thom Maholic and Joe Fuerst. The team believes their whole unit would have been killed or captured had it not been for the bravery of individuals like Brendan O'Connor.

Later this month, O'Connor will become only the second American to receive the Distinguished Service Cross, for valor in Afghanistan.

The rest of the unit was honored at Fort Bragg late last year and became the most decorated Special Forces team for a single battle in the Afghan war.

Thom Maholic's Silver Star was presented to his son Andrew. He stood proudly in front of the men whose lives his father had saved.

Two years after the battle, the village where the fighting took place - and much of southern Afghanistan - remain under Taliban influence.
Produced by Tom Anderson, Max McClellan, and Jenny Dubin