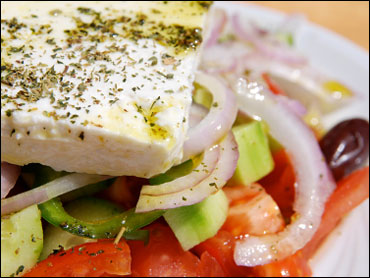 Few countries have as rich and fascinating a culinary history as Greece.

It's grounded in thousands of years of farming and cooking.

With news anchor Russ Mitchell in Athens for his leg of the Early Show series, "Destination Unkown," what better time -- or place -- for a sampling of some traditional Greek fare?

Russ was lucky enough to have it prepared for him by no less than Alexia Alexiadou -- chef, cookbook author, and publisher of Real Food magazine -- the top-selling food magazine in Greece.

She also discussed the important role of olive oil in Greek cuisine -- and how healthy it is.

Season the meat and cover it with 1/3 cup olive oil. Refrigerate for 2 hours. Stick the marinated pork meat pieces on the wooden sticks together with the pieces of lard. Season the meat sticks.

Grill the meat sticks on charcoal or grill in the oven, 3 inches away from the heat.

Brush the pitta breads with a little olive oil and toast under the grill, on charcoal or in a toaster. Serve with freshly cut tomatoes and onions and tzatziki. The Greek method is to wrap the pitas around the stick, pull out the stick and fill the pita folder with slices of tomato, onions and some tzatziki.

1. Drain the yogurt in a sieve lined with double-thick absorbent paper for some time in the refrigerator. The yogurt must contain no water.

2. Transfer the drained yogurt in a bowl and stir in the cucumber, garlic, oil and dill. Season to taste. Cover and chill. The more it stays in the refrigerator the tastier it becomes. Keep up to a week refrigerated.

1. Soak the bread in water for 5 minutes, then squeeze gently.

2. Put the fish roe, onion and 1/3 cup of olive oil in a food processor and process for a few seconds. Add the wet bread, little by little, crumbling it with your hands.

3. While processing, pour the remaining olive oil with a slow steady flow until all is absorbed by the mixture. Finally add the lemon juice. Adjust to your taste. Serve with pita bread and black olives. Accompany with ouzo.

1. Prepare the tomato mixture. Chop up the tomatoes and put them in a sieve. Mix with the cloves and a little salt and let them drain for 30 minutes.

2. Drizzle the paximadi (very dry bread pieces) with a little water, ouzo or vinegar. Arrange on a platter.

3. Top each paximadi with a tablespoon of anthotiro cheese and a tablespoon of the tomato mixture. Drizzle with olive oil and sprinkle with oregano. Excellent appetizer with ouzo or Cretan Tsikoudia or Raki.

1. Wash the vine leaves and cut the stems. Blanch them if they are fresh. Drain and let cool.

2. Prepare the stuffing. Mix the rice with the onion, herbs, half the olive oil, pine nuts and currants. Season with salt and pepper.

3. Lay the vine leaves one by one the working surface and put about one tablespoon of the rice mixture in the middle of each leaf. Fold the sides over and roll up into a neat oblong parcel.

4. Continue stuffing until you finish up with all the ingredients. Cover the base of a heavy based pan with a few leaves. Arrange the stuffed vine leaves on top packing them, in more than one layers if necessary. Pour over the remaining olive oil, boiling water and lemon juice.

5. Cover, bring to a boil and simmer the food until all the water is absorbed, around 40 minutes. Serve with Tzatziki. An excellent Greek appetizer. They are delicious served cold even the next day.

For the syrup:
3 cups sugar
2 cups water
1/2 cup honey
the rind of one orange or lemon

1. Prepare the filling. Mix together walnuts, almond, cinnamon and cloves in a bowl. Set aside.

2. It is preferred to use a baking sheet the size of the phyllo pastry. Generously grease the baking sheet with butter.

4. Score the top layers with a sharp knife into small diamond or triangle shaped pieces. Brush generously with the rest of the melted butter. Enter on clove on each piece.

6. Prepare the syrup. Mix all the ingredients in a heavy pan and heat until the mixture boils. Stop stirring and boil for 5 minutes.

7. As soon as you remove baklava from the oven, pour over it the syrup with a ladle and let it stand until it absorbs the syrup and cools completely. The desserts keeps up to two weeks at room temperature.

1. Peel the tomatoes and cut in 8 wedges each. Peel and slice the cucumber. Combine in a salad bowl with the rest of the ingredients and mix. Season with salt. Drizzle with vinegar and finally pour over the olive oil.

2. If you want a more modern Greek salad, add capers, ouzo drenched Cretan paximadi, some rocket leaves and a few pieces of green pepper or even hot Greek green pepper from Macedonia.