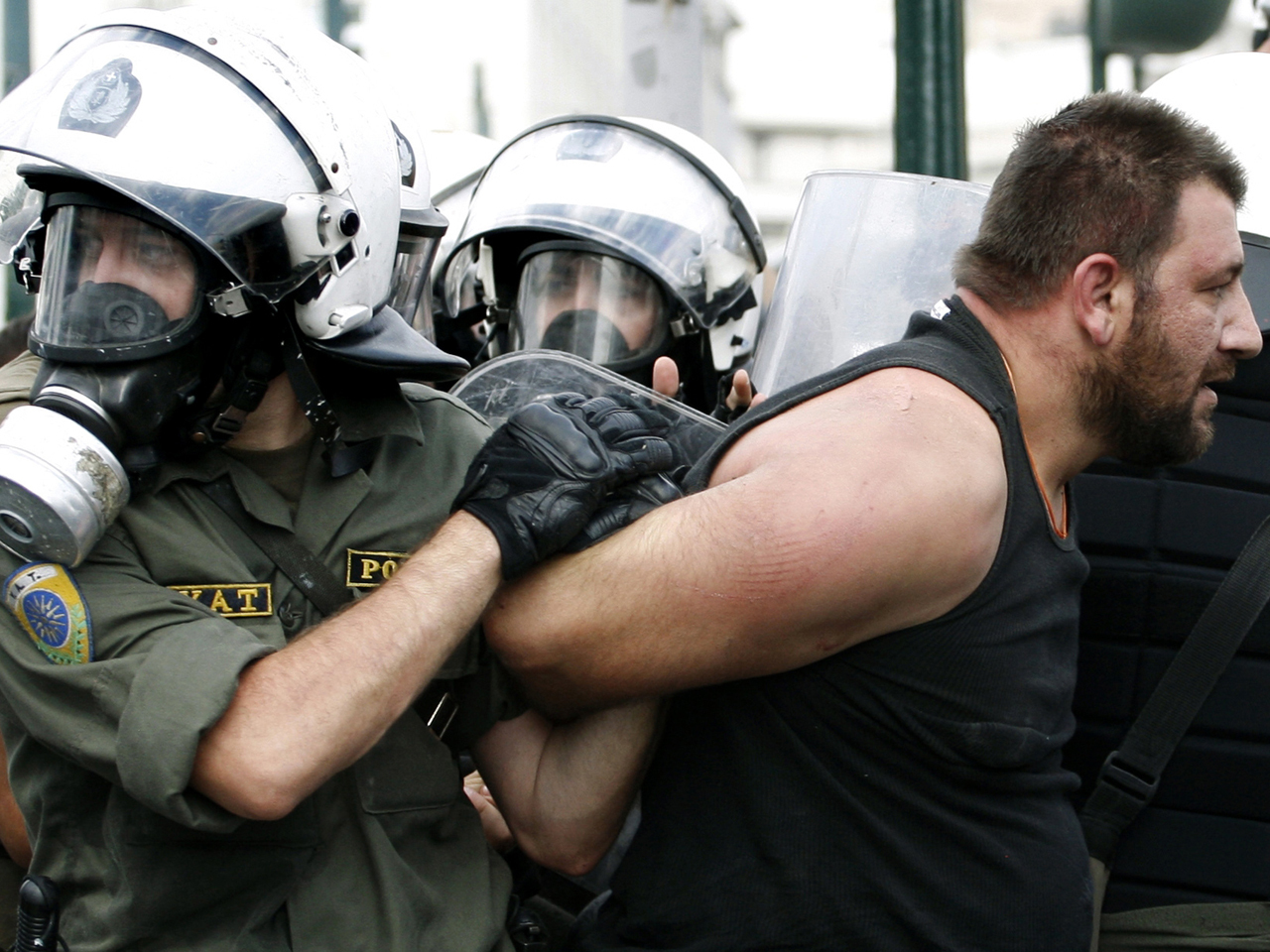 As Greece struggles to avoid a catastrophic default, demonstrators in Athens expressed outrage over their misfortune and bewilderment at a crisis that shows no signs of easing.

"Nobody knows what's going on. Every day they say something different. It's all so unclear," said Irini Sypsomou-Arapogianni, a 57-year-old Finance Ministry employee. "I don't know where all this will lead."

She said the government should have acted more boldly to stem the country's chronic tax evasion and seems to have lost its way despite pledges to stabilize the economy.

At least 16,000 protesters converged in central Athens, and another 10,000 gathered in the northern city of Thessaloniki, chanting slogans, banging drums and blowing whistles. The vast majority of demonstrators were peaceful, but a few dozen protesters near parliament threw stones at riot police, who fired tear gas. One man was seen bleeding from the head.

Air traffic controllers joined the 24-hour strike, grounding all flights to and from Greek airports. State hospitals were running on emergency staff, while lawyers, teachers and tax officers also didn't work. Public transport employees were holding work stoppages in the morning and evening, and state television and radio pulled news programs off the air.

Civil servants are protesting plans to suspend about 30,000 staff on partial pay, part of new cutbacks that come on top of salary and pension cuts. Greece has also seen repeated waves of tax hikes over the past year and a half.

Greece relies on a 110 billion euro ($145 billion) package of international bailout loans since May 2010, but it has slipped on meeting budget targets required to qualify for the funds. The country is suffering through a deep recession, with the economy expected to contract 5.5 percent this year, and unemployment has spiraled to above 16 percent as businesses have closed down.

Finance Minister Evangelos Venizelos said Tuesday that Greece has enough money to pay pensions, salaries and bondholders through mid-November. Greece needs the next batch of loans, worth 8 billion euro ($10.5 billion), to avoid bankruptcy, however.

In Brussels, Antonio Borges, the head of the IMF's Europe program, piled pressure on Greece to take more stringent measures to get its economy back on track, saying there was no rush to take a decision on the next slice of bailout money because the country doesn't face a big bond repayment deadline until December.

Protesters in Athens directed anger at the foreign creditors, saying they had little hope that the hardship inflicted by austerity measures would yield benefits in the long run.

"If these protests don't have an effect, then we deserve our fate," said Zacharis Zacharia, a 59-year-old demonstrator. "Everybody's paying except those few who drove us to this point."

Global markets have been roiled by concerns that a messy Greek default could bring down European banks, drag other troubled eurozone countries into further financial trouble and trigger another global recession.

Venizelos insisted Greece would be able to meet its commitments and that there was no question of a default — but urged his countrymen to pay their taxes and support the government effort to ensure the situation doesn't deteriorate.

Debt inspectors from the International Monetary Fund, European Central Bank and European Commission, known as the troika, suspended their review of Greek reforms last month amid talk of delays on Athens meeting its budget deficit targets and implementing reforms.

The government hurriedly announced another series of austerity measures, including an extra property tax, and put into motion plans to suspend civil servants. The troika returned to Athens after the announcements and are currently negotiating measures for 2013 and 2014.

Even members of the Socialist government have voiced concerns, saying Greeks cannot stand any more taxes.