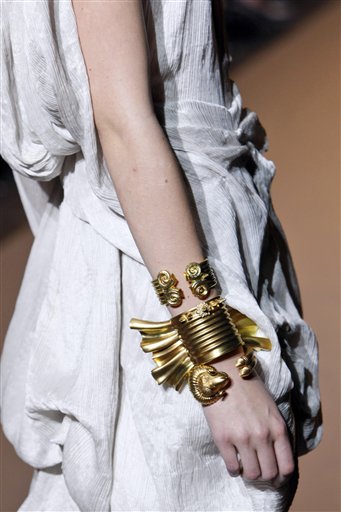 Greek designer Sophia Kokosalaki served up on Saturday a spring-summer 2010 ready-to-wear collection of artfully draped cocktail dresses that would have done her ancestors proud.

"I did all my drapery in wet fabrics, just to keep it really light and effortless," the imposing blond told The Associated Press in a post-show interview.

The abbreviated, asymmetrical dresses in black, ivory and purple-y gray fluttered invitingly as the models tromped down the catwalk. Still, the dresses were not so different from the short, draped bustier and sheath cocktail numbers that have already dominated many other Paris runways.

"My heritage is so rich, it's a never-ending source of inspiration," she said, adding with a laugh, "It's a bit of a joke, but Greek people like to say that all the designs, all the motifs out there, their origin is Greek."