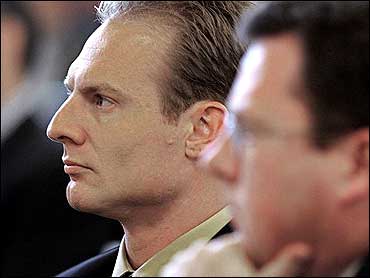 The band manager whose pyrotechnics display sparked a nightclub fire that killed 100 people in 2003 was freed from prison Wednesday after serving less than half of his four-year sentence.

Daniel Biechele, 31, walked from the front door of Rhode Island's minimum security prison into his lawyer's car at midday and was driven away. He did not respond to questions as he got into the vehicle.

His attorney, Thomas Briody, has declined to comment on Biechele's plans, but prison officials in his home state of Florida have said he would serve his parole there.

Biechele, the former tour manager for the 1980s rock band Great White, pleaded guilty in 2006 to 100 counts of involuntary manslaughter for his part in the fire at The Station nightclub in West Warwick.

Sparks from the pyrotechnics display at the start of Great White's set on the night of Feb. 20, 2003, ignited flammable foam that lined the walls and ceiling of the one-story wooden roadhouse. The flames sent out toxic black smoke and created temperatures so high that most of the dead were killed within minutes. Panicked concertgoers became trapped at the front door. More than 200 people were injured.

Biechele was indicted along with club owners Jeffrey and Michael Derderian on 200 counts each of involuntary manslaughter. He was to have been the first of the three to stand trial, but struck a plea deal with prosecutors. He got four years, plus an additional 11 years suspended and three years' probation.

The parole board unanimously decided in September to release Biechele early, saying he had shown genuine remorse and had the support of family members of victims.

Many family members have said they appreciated Biechele's apologies - he sent each family a handwritten letter after his sentencing to express his remorse. He also tearfully apologized at his sentencing hearing, saying he wasn't sure he could ever forgive himself, and didn't expect forgiveness from anyone else.

Michael Derderian, also serving a four-year sentence after pleading no contest to involuntary manslaughter for installing the foam, is due out on parole in October 2009. Jeffrey Derderian was spared prison time and sentenced instead to probation and 500 hours of community service, a sentence he completed last year.