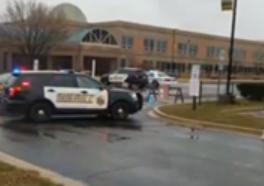 GREAT MILLS, Md. - A 16-year-old girl who was shot at a Maryland high school Tuesday morning remains in critical condition, CBS station WUSA reports. Authorities say the girl, Jaelynn Willey, had a prior relationship with the gunman, Austin Wyatt Rollins, 17, who opened fire with a semi-automatic handgun in a hallway of Great Mills High School.

Rollins died of a gunshot wound after he was confronted by a school resource officer. Police say the officer, Blain Gaskill, responded within one minute of the shooting. It wasn't immediately clear whether the shooter took his own life or was killed by the officer's bullet, officials said.

Isiah Tichenor, a student witness of the shooting, told The Washington Post that Rollins had the gun pointed to his own head when Gaskill ordered him to disarm. "We know you don't want to hurt anyone," Tichenor said he heard the officer say before two shots were fired.

According to a statement released by the St. Mary's County Police Department Wednesday afternoon, the gun Rollins used in the shooting was legally owned by his father. The investigation has not yet uncovered any public social media threats or posts made by Rollins. Detectives are continuing to interview his family, friends, and associates for more information.

Police say that Rollins had a relationship with Willey that had recently ended. "Whether the motive was simply to shoot her, and that was the motive, and no more -- we may or may not ever know that," Sheriff Tim Cameron told reporters.

Cameron also praised Gaskill, a former SWAT team member, saying there was "no question that his actions, his quick and immediate actions, potentially saved a great number of lives."

A second student who was wounded in the shooting, a 14-year-old boy who was shot in the leg, is in good condition, CBS Baltimore reports.

But Jaelynn Willey is still fighting for her life. She is one of nine siblings, according to a statement from the family, and a member of the swim team.

"Jaelynn is an amazing young lady, whose peaceful presence and love of her fellow students and family is known throughout her Maryland-based school," the family statement said.

Investigators say they have video of the shooting, which will help them evaluate exactly what happened. Meanwhile, the St. Mary's County Public School system announced it is offering on-site counseling services Wednesday, as well as a crisis hotline. In a letter Tuesday night, the principal of Great Mills wrote that classes will resume April 2 after spring break.