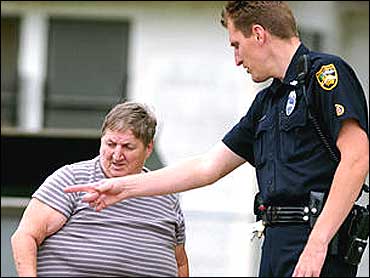 A man accused of bursting into a convenience store demanding money was in the hospital Friday — shot, authorities said, by the great-great-grandmother working behind the counter.

Janet Grammer was filling in for the regular clerk Thursday afternoon when a man entered the store waving a gun and fired two shot at the back wall.

"I think he thought I was an old woman and would just give him the money," Grammer, 64, said Friday. "My life was at stake. I thought he was going to kill me."

So she pulled a pistol out from under the cash register and fired once, hitting the man in the chest. He fell to the ground, dropped his gun and then fled, leaving a trail of blood. Grammer fired two more shots as he was running away.

The sheriff's report said a man fitting the suspect's description and injury went to a hospital a short time later. He told doctors he shot himself.

The man, whose name has not been released, was being treated at Shands Jacksonville hospital Friday for a wound to the chest. Police spokesman Ken Jefferson said the man faces robbery charges.

Grammer said she never had to shoot anyone during her 10 years of working as a security guard. "I'm sick over it. It was very upsetting. I'm not feeling real perky."