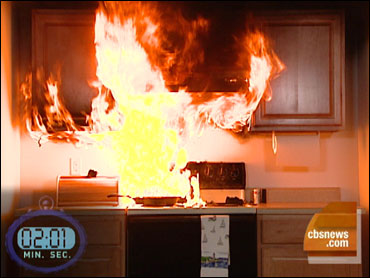 Cooking fires are the leading cause of home fires in the United States. And grease fires are a main culprit.

Bottom line: DON'T use water -- it only makes things worse.

You need a fire extinguisher that can handle grease fires: It should be dry and chemical-based.

It takes only a few minutes for a small grease fire to flare up and consume an entire home.

Cooking fires cause more than 480 fire deaths each year, and nearly $900 million dollars in property damage.

To see first-hand just how out-of-control grease fires can get, Koeppen went to the State Farm Insurance technology research lab outside Chicago.

State Farm researcher John Donovan told her, "Not many people know how to handle a kitchen fire and what to do if one were to start."

Donovan is an expert in grease fires and, with firefighters standing by, he demonstrated what not to do when it comes to kitchen fires.

He threw a small cup of water on a small grease fire in a pan on a stove, and the flames doubled in size almost instantly.

"Absolutely," Donovan says, "the worst thing you can do to a grease fire is throw water of any sort on it, any amount, anything. Now water."

Trying to smother one by throwing a wet towel on it, again, the flames shot up.

Also, Donovan pointed out, "you may try to put the towel on (the flames) and actually pull the pan off the stove, and then you've got burning oil on the floor and, most likely, you've got it on whoever was trying to throw the towel. So, you're causing more problems than you're trying to solve."

Even using a fire extinguisher that's water based can have disastrous results, Koeppen pointed out. They tried it, and the flames shot to the ceiling.

What you need, she added, is a dry chemical fire extinguisher specifically designed to deal with grease. It put out the grease fire in the pan in seconds.

"Basically," Donovan said, "you pull the pin, you squeeze the trigger, and you're aiming at the base of the fire. You want to put that fire out at the base. If you put it up high, the chemical falls on top of the fire and doesn't do a bit of good."

Also, Koeppen says, if the flames are small enough, carefully put a lid on the pan, and turn off the heat.

But, Donovan cautions that you shouldn't try to move the pan, because, "Many people get burns or start fires elsewhere as they're trying to take that pan get it outside."

If a grease fire is left alone, even for a few minutes, your whole kitchen can go up in flames, then the rest of your house, Koeppen observed.

From the time a grease fire starts, how long do you realistically have to try to put it out on your own?

Not very, Donovan says: "Once a fire lights, you have 30 seconds-to-a-minute of opportunity, probably. ... If you can get it within the first 30 seconds, say you were standing in the room when it happened, you could probably get a lid on it and put it out."

If you have a kitchen fire, the first thing you should do is call 911 before you try to battle it on your own, Koeppen advises.

She says you should have fire extinguishers in or near your kitchen. If you have a traditional one, look on the front, and make sure it says "ABC," so you'll know it will work on everything -- wood, paper, grease, electrical equipment. One Koeppen had on the set sells for $20.

She also pointed to a smaller, white one you could put it in a corner. People won't notice it, if that matters to you and you don't want a red one in your kitchen.

Both are made by First Alert.

Another possibility is First Alert's "Tundra.

"It's a spray bottle," Koeppen says. "People are intimidated about pulling the pin and using a fire extinguisher. All you do is spray (the Tundra." It costs $15 and is effective against wood fires, grease fires, electrical equipment fires, etc. It's only 22 ounces and you can easily keep it in a cabinet.