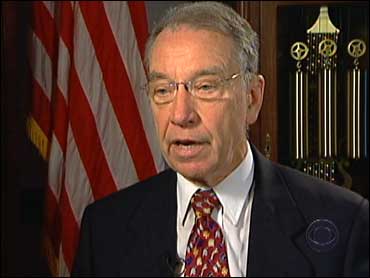 (CBS)
Sen. Chuck Grassley, an Iowa Republican, said at a town hall meeting today that Americans "have every right to fear" government health care reform efforts, which he suggested would lead to the government deciding when to "pull the plug" on older Americans.

"In the House bill, there is counseling for end of life," Grassley told a crowd of approximately 300, according to the Iowa Independent. "You have every right to fear. You shouldn't have counseling at the end of life, you should have done that 20 years before. Should not have a government run plan to decide when to pull the plug on grandma."

Grassley's claim is based on an inaccurate interpretation of an end of life counseling provision that appears in the House health care bill as it now stands. As President Obama explained at his town hall yesterday, the provision in question would allow Medicare to pay doctors to counsel patients about end-of-life care issues, such as living wills and hospice care. Only those seeking such guidance would receive it.

The provision would not, Mr. Obama said, "basically pull the plug on grandma because we decided that it's too expensive to let her live anymore." Republican Johnny Isakson, who has supported similar provisions in the Senate, called the notion that such counseling promotes euthanasia "nuts." (It should be noted that Isakson released a statement yesterday saying he does not support the House provision as it stands now.)

Grassley said this morning that "there are some people who think it is a terrible problem that grandma is laying in a bed with tubes in her… and that the government should intervene. I think that's a family or religious thing that needs to be dealt with."

Following the event, the Iowa Independent points out, Democratic state Sen. Joe Bolkom called for Grassley to condemn the people spreading lies about the issue. Bolkom noted that Iowa already has a similar counseling provision on the books.

House Republican Leader John Boehner (R-Ohio) and Republican Policy Committee Chairman Thaddeus McCotter (R-Mich.) put out a statement last month claiming the health care legislation "may place seniors in situations where they feel pressured to sign end of life directives they would not otherwise sign. This provision may start us down a treacherous path toward government-encouraged euthanasia if enacted into law."

And former Republican vice presidential candidate Sarah Palin has also pushed this idea, warning that "my baby with Down Syndrome will have to stand in front of Obama's 'death panel' so [President Obama's] bureaucrats can decide, based on a subjective judgment of their 'level of productivity in society,' whether they are worthy of health care."

As several media outlets have noted, the claim that federal bureaucrats would play God under the current bills is false.