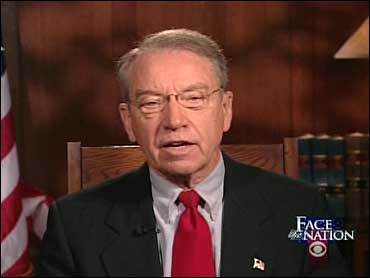 (CBS)
Republic Senator Charles Grassley, a vocal opponent of bonuses granted to executives at AIG, said the general public in his home state cannot understand how million-dollar-plus payments can be made at a failing company that has been rescued by the taxpayers.

"Iowans … just don't understand how people who make $20 million a year can drive a corporation into the ground, go suck off the taxpayers for bailouts, and then give out millions of dollars of bonuses," Grassley said on CBS News' Face The Nation Sunday.

"There is a whole different ethic when you have the taxpayers bail you out," he explained. The senator told host Harry Smith he wants to hear apologies and contrition from the corporation.

Grassley also said that the "best leverage" Congress has to curb the effects of the bonuses is taxing AIG (and any other company receiving government bailout funds), but that a tax on bonuses is a stop-gap measure. "Other things need to be done to make sure that people that are on the dole from the taxpayers can't do these sorts of things in the first place," he said.

He said he was "a little cynical" about Majority Leader Harry Reid (D-Nev.) scheduling a vote on bonus taxation legislation, charging that Reid is prioritzing another bill "that is not as significant as getting back the $168 million of the taxpayers' money into the Federal Treasury."

Regarding Timothy Geithner's political future and the calls from some for the Treasury Secretary to quit, Grassley said he ought to be given more time.

Grassley did insinuate that the choice of Geithner for Presdient Obama's Cabinet was stuffed down lawmakers throats.

"We were told a long time ago that Geithner had to be Secretary of the Treasury because he was the smartest one to handle the job, he had to be on the job right now," he said.

"He screwed up twice with AIG, when he was president of the Federal Reserve, once now as Secretary of the Treasury," he said. "I think it raises questions about whether he has his eye on the ball or not."

Asked about the toxic asset plan expected to be released next week, Grassley said he hopes it would succeed — but that Mr. Obama's attempts to build confidence in his economic plan may not. "Maybe the president's trying to take on too much," he said. "You know, he wants to emulate Franklin Roosevelt. Franklin roosevelt called for a cut in government salaries and spent the first 100 days trying to build confidence.

"I'm not sure that this is going to build confidence until we see how it works," Grassley said. "It sure didn't work when Secretary Paulson tried to do it. It's a thing that should have been done starting October 1. I hope that they follow through with it. I hope it works."