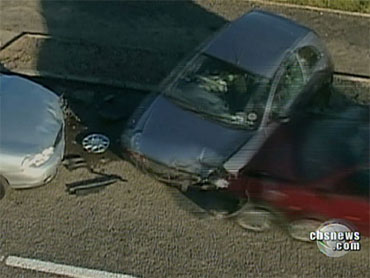 It's one of the most dangerous things you can do - texting while driving.

There are laws against it in more than half the states. Studies show it can increase your chances of having an accident by four times. But people keep doing it.

The message is not getting through. So in Britain, there's an effort to make the message a lot more dramatic, as CBS News correspondent Richard Roth reports.

It's a 30-minute video with slick production made for showing in British high schools - made to demonstrate the distracting danger of texting on a cell phone while driving.

It's also very deliberately made to shock.

The film shows numerous violent car crashes. They're cinema - not real footage. But the images are so graphic and horrific that the film was labeled for 18-and-over only when an excerpt landed on YouTube last week.

Its writer and director - who cast his own son Henry in the video - makes no apologies.

Produced last summer for the Gwent police force in south Wales, which picked up most of the almost $20,000 cost - it's called "the film that will stop you texting and driving." And it may already be working.

"As you know, this video has been viewed around the world now by 1.5 million people, and we have had e-mail after e-mail after e-mail from people saying, 'I will never ever text and drive again' - from young people," said Gwent police chief constable Mick Giannasi.

Authorities in Britain say texting while driving slows reaction time 35 percent - making it more dangerous than driving while high or drunk. Yet 48 percent drivers under 25 have done it.

The young actors in the video knew that. What they didn't know was that their work, finished last summer, would have such impact.

Amy Ingham was one of her passengers.

And if the lesson saves just one life, they say, that would be awesome.

Read more from Richard Roth about this story and the making of the PSA video in CBSNews.com's Couric and Co. blog.