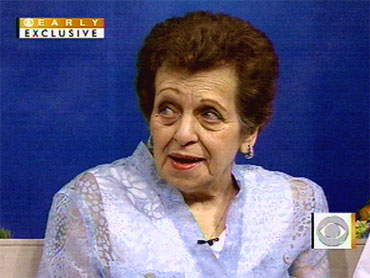 Brooklyn grandma Mary Shammas was on the bus when her left palm started itching.

Remembering the old superstition that an itchy left palm means money is on the way, Shammas, 73, jumped off the bus and bought a lottery ticket.

On Tuesday night, she hit a $64 million jackpot.

Mary told "Early Show on Saturday Morning" co-anchor Erica Hill how it all happened. "I had a terrible itch that I've never had before," Mary said, "within the short while, it was three or four times happening. And I said to myself, 'This means something. It's an old fashioned superstition, but you know what, I haven't played Mega(Millions) in a couple of weeks. Let me just go and validate a ticket' that I had - an envelope with all my numbers in my bag."

Mary says she always plays the same numbers, based on her cousin's family members' birthdays.

"I went in," she continued, "and validated the ticket, spent $5, never dreaming that maybe I'll win $10 or something, you know?"

Sixty-four million dollars, she said, "was not in my brain at the time!"

Days later, when she thought she'd won, she called her son, Joseph, made his promise not to tell his siblings, then asked him to come over to confirm her great fortune.

Before her did, Joseph called his brother, Richard.

"Joseph did not believe me," Mary recalled. "He walked over. And checked the ticket and said, 'Ma, you really won! And it was all night back-and-forth conversing. Nobody slept."

Richard told Hill he "was in total shock, I gotta say, because my brother called me and whenever you get a call late at night, you're assuming it's bad news. And you're never assuming that it's gonna be this kind of news. So once I got this kind of news, I just -- I just was in shock. I really -- we didn't even believe it. Even 'til this day, I think my whole family is still in shock. We're wondering if we're gonna wake up and say we dreamed we won $64 million. But it's unbelievable.

"It's just been incredible. You know, I don't even know really what to say, what to do. Right now, it's so amazing, the feeling and not having to worry. She really outdid herself!"
Mary says, "It's the best feeling in the world anyone could have, because I'd like to see them (her family) have a better life than I had - (I had) a rough life, and I'm glad I'm able to give them this. This is my joy in life."

Is there something she's always wanted to do that now, she can?

"It's not a big thing," Mary replied. "Maybe go to Atlantic City. Something like that. ... Now I'm playing more and hoping I win again!"

Mary, though, suffers from lung cancer, and can't leave home most days.