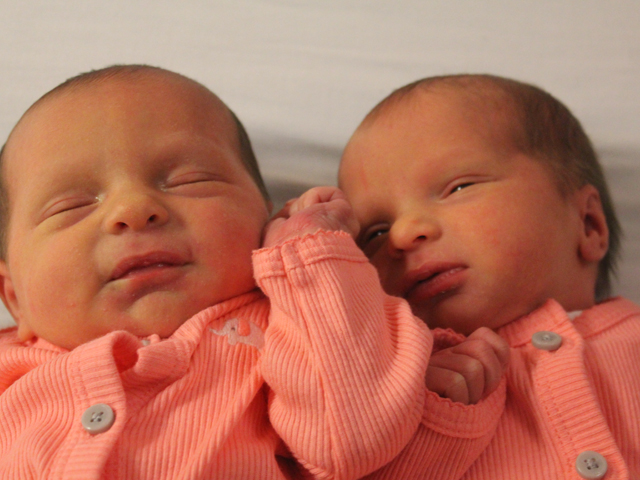 The Larkins of Iowa have two new bundles of joy thanks to a very special woman -- the twins' grandmother.

"They are so much Ashley and Jay's. I never considered them to be other than their babies," 53-year-old grandmother and gestational carrier Susie Kozisek told CBSNews.com. "We just love to be with them and spoil them."

The newborns, named Hadley and Hallie, mark the second and third babies that Kozisek has carried for her daughter, Ashley Larkin.

Larkin, 28, was told it was too risky to get pregnant because she had pulmonary hypertension. The condition causes high blood pressure in the arteries of the lungs, which makes the right side of the heart work harder than normal.

Larkin and her husband Jay decided that they were going to try to adopt children, until Koziesk made her generous offer.

Koziesk had been watching a talk show that featured gestational carriers, who are women who carry and deliver a child for another couple or person. She went to her doctor to see if it was feasible for her, and was told that she would be a good candidate because she didn't have pre-existing conditions like high blood pressure or diabetes. Larkin admitted that the couple did have some concerns about her mother carrying their first child, especially since she was 50 at the time.

"She was more than willing to try so we gave it a shot," Larkin explained to CBSNews.com.

In the Larkins' case, the genetic material from the egg and sperm came from the husband and wife, and their fertilized eggs were implanted into Koziesk. Because Kozeisk has already gone through menopause, she had to go on hormone treatments as well to prepare and keep her uterus in the state it needed to be to bear children.

The first pregnancy, which resulted in the couple's daughter Harper, went so smoothly that they decided to ask Koziesk if she was interested in giving her first granddaughter a sibling.

However, this time around there were some issues. The family's fertility expert Dr. Jani Jensen, an assistant professor of obstetrics and gynecology at the Mayo Clinic in Rochester, Minn., told CBSNews.com that typically the cutoff age for gestational carriers in the U.S. is about 51.4 years old, which coincides with the average age of menopause. Koziesk was 52 when she was approached for the latest plan.

"We took into serious consideration her age from an ethical medical standpoint," Jensen said. "But she had done really well with the first pregnancy, and this family still had embryos available in storage. If we didn't use them on Suzie, we would have to get rid of them entirely."

"I've definitely had sisters carry for sisters, cousins carry for cousins, but I've never had a parent carry for a child," she admitted.

What no one was counting on was both embryos that were implanted would end up attaching themselves to the uterine wall, resulting in twins.

"(I was) shocked, and not quite as confident as I had been when we started the process with Harper," Koziesk admitted. "You just wrap your head around it and just trust the doctors."

Jensen explained that the pregnancy was high-risk, not only because of Koziesk's age, but because she was carrying multiple fetuses. However, outside of a couple extra doctor's visits and ultrasounds, Larkin said there wasn't much extra work needed to be done for this pregnancy.

"I'm amazed at how well she did," Jensen said. "I've had patients who are two or three decades younger who didn't do as well in pregnancy as she did. I think she's a real role model."

Larkin was in the delivery room when her daughters were born via C-section. They didn't know they were expecting girls until they came out, which was a nice surprise for the couple.

The family has their hands full -- so there's no talk of trying again or adopting a boy -- but the possibility is always there. For now, they're enjoying their three young girls.

"(The kids) are her world obviously," Larkin gushed. "You can just tell there's a special place in her heart for those kids."

As for Koziesk, she only spent three days in the hospital. She said doctors told her that these gestational pregnancies would not be as easy as her previous four children, but Koziesk admitted she really didn't feel a difference. A month after giving birth to twins, she was back to work at her part-time job.

"I didn't have to get up at night with babies," Koziesk said about her quick recovery. "I can come and help her when I want and visit the babies when I want -- and go home."