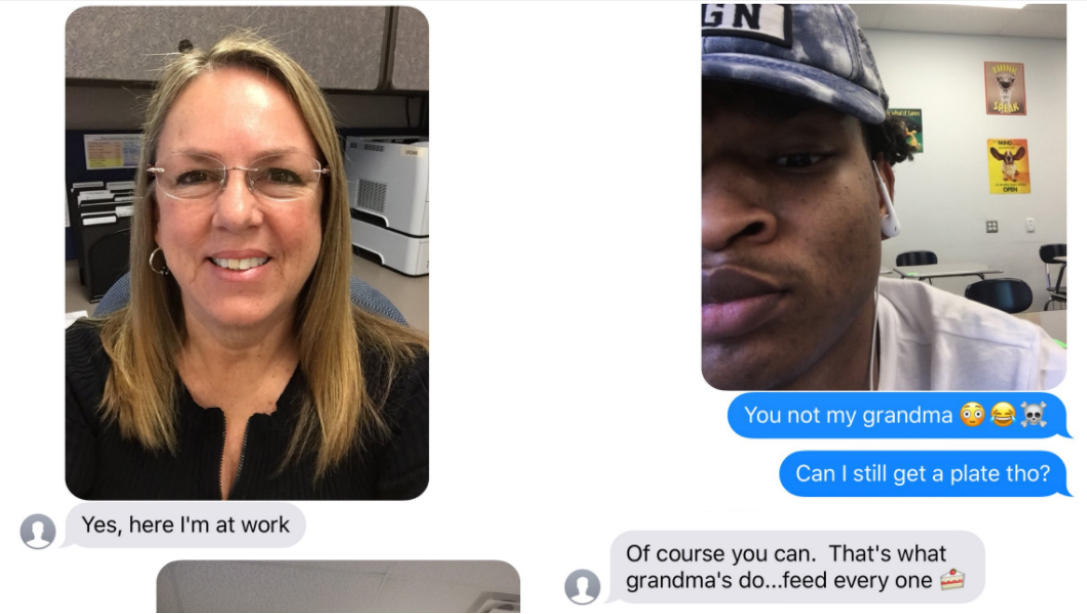 Like any good grandmother, Wanda Dench wanted to give her grandchildren advance notice of Thanksgiving plans this year.

And she knew the best way to communicate with “kids” these days: by text.

So, instead of dialing up her grandson, the Phoenix-area woman typed a quick message.

“Thanksgiving is at my house on Nov. 24 at 3:00 p.m. Let me know if you’re coming. Hope to see you all. Of course that includes Amanda & Justin,” Dench wrote on Monday.

But the response wasn’t quite what she expected.

The hip grandma replied, “Your grandma,” complete with an emoji.

Jamal Hinton, a 17-year-old high school senior, was surprised to get a random text from his grandma. He had no idea she even knew how to use a cellphone, let alone text on an iPhone.

The skeptical teen then asked the woman, whose number he didn’t recognize, to send him a picture.

When she did, he laughed. It wasn’t his grandma after all. It was a complete stranger.

“You not my grandma,” joked Hinton, along with a selfie. “Can I still get a plate tho?”

Dench didn’t skip a beat. Within seconds, she replied, “Of course you can. That’s what grandma’s do...feed everyone.”

The teen was so tickled by Dench’s response that he shared the exchange with his friends, and then posted it on social media.

As of Friday, a screenshot of the hilarious conversation between the pair has been shared more than 190,000 times on Twitter.

The 17-year-old wasn’t sure if Dench’s offer was genuine, but she assured him it was — and he was welcome to join her family for Thanksgiving.

“She said that I can have a plate and that I’m actually invited now,” Hinton told CBS affiliate KPHO.

“I just went with my gut and said, ‘Sure, Grandmas feed everybody,’” Dench explained.

Since the conversation was posted online, Dench has received dozens of texts from strangers across the country, thanking her for her good deed.

“At first I thought, ‘Well this is annoying,’ until I started reading some people’s texts who were saying thank you so much, you’re such a kind person to let this young man into your home,” she said. “From what I kept reading, I thought, ‘Oh my gosh! I think this may be a little more important than what I thought it was.’ ‘Cause of all the racial tension that’s in the country.”

On Wednesday, just two days after the initial text, Dench and Hinton met in person. Again, she invited him to Thanksgiving and he graciously accepted.

Accidental or not, Thanksgiving truly does bring people together.