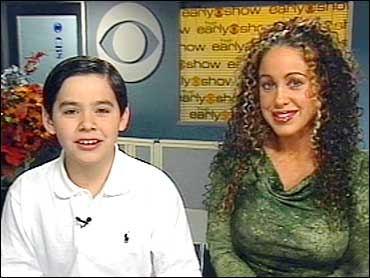 The "Star Search" finale got back on track Wednesday night after being put on hold by war.

"I just never thought I could get a perfect 5 from the judges," said 12 year-old David Archuleta, winner of the junior singer category. He had performed on the March 19 finals, but war coverage interrupted the show before a winner was chosen.

But Chantele Doucette from Bristol, Conn., who won in the adult singer category, said she had grown impatient waiting two weeks to perform.

"I was ready to go and then we were interrupted. But, my prayers and thoughts went out to the soldiers fighting for us," Ducette said. "No one is happy about being at war. But at the same time, I was anxiously waiting to get back to 'Star Search.'"

Ducette told The Early Show co-anchor Hannah Storm she never expected to win. "I would have been happy with one performance on 'Star Search' and to be able to come all the way to the end, and actually be the winner, it is a dream come true for me."

The judges could not decide who was a better singer, Ducette or Freedom Bremner. So Doucette had to wait for the home audience to break the tie. With 33 stars she got $100,000 plus a recording contract with Sony music.

"It was really incredible. I mean my competitor was fantastic. I didn't know what to do. It was just more waiting," Ducette said.

As for David, he said when he found out he won, his mind went blank. "It has just been amazing for everyone and all my family," he said. David spent the last few weeks at home in Sandy, Utah, where family and friends had a huge celebration for him.

Doucette said she plans to hopes to make some wise investments, "I haven't thought about that yet, " she said. "That's a lot to deal with, $100,000. Definitely more than I've ever dealt with."