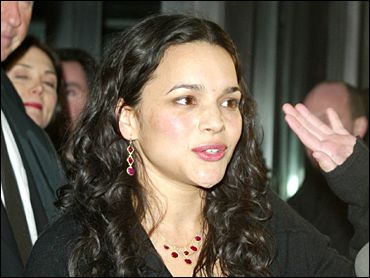 Talk about a Grammy sales bump — Norah Jones' debut album, "Come Away With Me," sold 621,000 copies after her Grammy success, almost 500,000 more than the week before — the biggest post-Grammy sales spike ever, according to her record company.

Jones' disc, which won eight Grammys, including album of the year, is the No. 1 album in the country, according to figures released Wednesday.

Its sales rose 331 percent, according to EMI Recorded Music, which owns her label, Blue Note Records. The previous week, the disc had sold about 144,000 copies.

Jones' huge sales leap knocked R. Kelly off the top of the charts. His "Chocolate Factory" placed at No. 3, while rapper 50 Cent moved from No. 3 to No. 2 with "Get Rich or Die Tryin'."

Jones, who also won best new artist, performed "Don't Know Why," which won record and song of the year, on the Feb. 23 Grammy broadcast.

"I can't believe this," she said breathlessly.

Other Grammy-winning and nominated artists experienced a sales increase, though not as significant as Jones' bump. The Dixie Chicks, whose "Home" won three Grammys, saw album sales rise from 127,000 the previous week to 202,000, placing the disc at No. 4; and John Mayer, who won the best pop male vocal award, sold 97,000 copies of "Room for Squares," compared with 45,000 the previous week. It placed at No. 8.