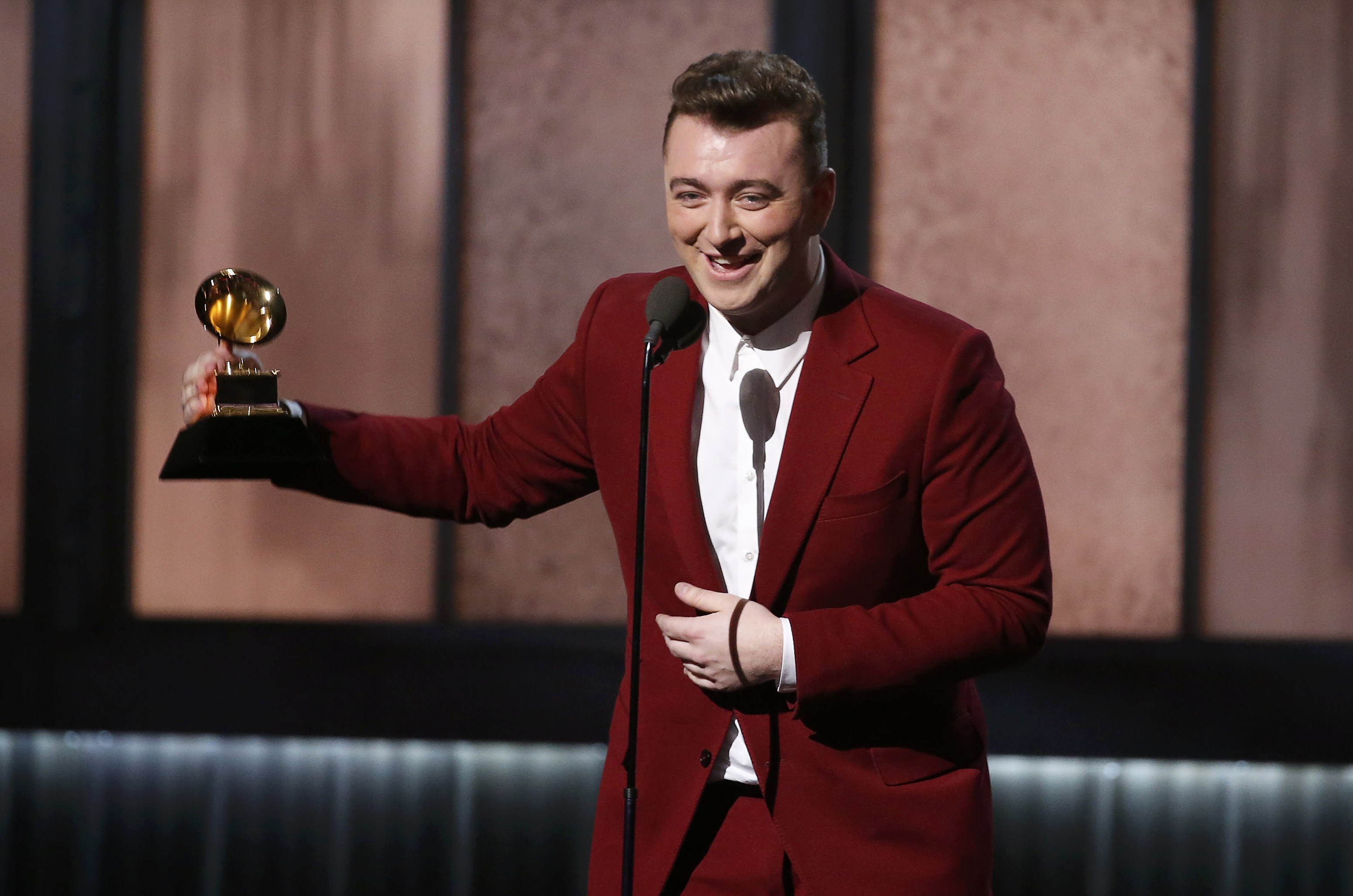 Sam Smith, Beck and Beyonce were among the big winners at the 57th annual Grammy Awards Sunday night at the Staples Center in Los Angeles.

Smith, who picked up four awards in all, probably summed up his evening the best.

Upon receiving the song of the year honor for his hit "Stay With Me (Darkchild Version)" the British singer said, "I'm having a really, really, really good night."

While onstage for his record of the year win, Smith said, "This is the best night of my life," adding, "I want to thank the man I fell in love with last year...Thank you so much for breaking my heart because you got me four Grammys."

His prizes also included the first honor of the night: best new artist. Taylor Swift -- a former loser in the category -- handed him the gramophone award at the ceremony, which aired on CBS.

"I'm going to try to say something without crying," Smith said before thanking his record label and his mom and dad. "I won a Grammy, thank you!"

He also walked away with best pop vocal album and gave a touching speech about trying to make it in music industry -- he tried to lose weight, but the music was still "awful," he admitted.

"It was only when I started to be myself that the music started to flow and people started to listen," said Smith, who later took the stage to sing with collaborator Mary J. Blige.

Another big winner of the night? Beck. He scored best rock album and album of the year for "Morning Phase," his 12th studio release. The album of the year win was a bit of a surprise -- as signs were pointing to others in the category, including Smith, Ed Sheeran or Beyonce. Even Beck looked shocked to hear his name called.

"We made this record at my house...I like to thank my kids to let me keep them awake a little longer," he said onstage.

"This is such an honor," Beyonce said before raving about the year she's had. "I love you deep," she said to Jay Z. She also gave a shout-out to daughter, Blue Ivy, who was watching.

"I'm not going to make this awkward and long...I was so prepared for everybody who is so talented in that category to walk away with that award," he said.

The night was filled with a batch of performances. AC/DC kicked off things off with a big dose of rock and roll. The Australian group played a medley of songs that included "Highway to Hell" -- all of which got the audience members on their feet and dancing.

"We're only going up from there," said host LL Cool J following the performance. And it arguably did.

Ariana Grande showed off her vocal chops, slowing things down with "Just a Little Bit of Your Heart."

Madonna showcased her new single, "Livin' For Love," with a dance-heavy performance that resembled the video for the track. She urged the crowd to get out of the seats near the end of the song for a sing-along, too.

Musical duets and collaborations made up a lot of the three-and-a-half-hour show. Sheeran performed "Thinking Out Loud" with John Mayer, Herbie Hancock and Questlove.

AC/DC wasn't the only veteran rock outfit at the show. ELO's Jeff Lynne took the stage to perform "Mr. Blue Sky" and "Evil Woman," with Sheeran joining him on guitar and vocals. The crowd got into this one, too. Well, at least Paul McCartney did. Who else caught him in the audience rocking out to "Evil Woman" before realizing he was the only one standing? He quickly sat down.

Gwen Stefani and Adam Levine -- both judges on "The Voice" -- sang "My Heart is Open," while Jessie J performed with Tom Jones, and Usher took the stage with Stevie Wonder. Irish singer Hozier brought out Annie Lennox for his breakout hit "Take Me to Church." The pair then teamed up for a sultry rendition of "I Put a Spell On You."

Grammy winners Lady Gaga and Tony Bennett brought their classic duets to the stage, too. Beck and Chris Martin of Coldplay dueted together as well.

And on the heels of their recent collaboration, Rihanna, McCartney and Kanye West all hit the Grammy stage for "FourFiveSeconds."

With her back to the audience, Sia performed her hit song "Chandelier" with none other than actress Kristen Wiig -- who showed off some spot-on dancing skills.

President Barack Obama even made an appearance at the ceremony -- to relay a message about sexual assault as part of "It's on Us," an anti-domestic violence campaign the Obama administration launched last year. In a taped video message, he said that rape is "not OK -- and it has to stop."

Mr. Obama's speech led into Katy Perry's performance of "By the Grace of God."

Meanwhile, a batch of honors were handed out ahead of the televised ceremony. Rosanne Cash scored three Grammys, and Beyonce, Pharrell, Eminem and Kendrick Lamar each walked away with two before the awards show even started.

Her daughter, Melissa Rivers, accepted the honor, saying, "If my mother was here tonight, she would not only be honored and thrilled to be holding her first Grammy, she would most likely have it copied and on the air on QVC by 11."

On the red carpet multiple nominee Smith said, "I'm just happy people know who I am. Last year, no one knew who I was."

Going into the ceremony, Smith, Beyonce and Pharrell led the pack of nominees this year with six nods each, including album of the year. Iggy Azalea, Beck, Eric Church, engineer Tom Coyne, Drake, Gordon Goodwin, Jay Z, Miranda Lambert, Sia, Usher and Jack White were not far behind with four nominations each.

Prince also made a surprise appearance, which received a standing ovation from the audience. His takeaway involved the art of a full album -- and more.

The Grammys show ended just like it started: with a performance. Dressed in all white, Beyonce took the stage to sing "Take My Hand Precious Lord" before Common and John Legend linked up for "Glory" from the civil rights movie "Selma."

Tell us: What did you think about the 2015 Grammys?