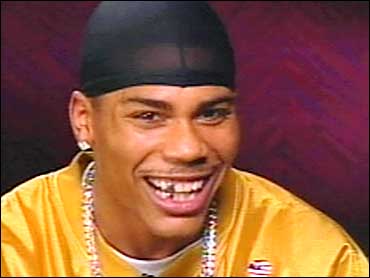 With two solo albums to his credit, rap star and pop icon Nelly is on his way to stardom.

And that's just the beginning. He's launched his own clothing line and has a television development deal in the works. With his funky rap style, this St. Louis native sports a Midwestern twang that sets his sound apart from others on the radio.

"I think you dream it," Nelly told The Early Show co-anchor Rene Syler. "I didn't pretty much know the nature of how business went as far as album sales as a kid. I just thought like, you know, once you got on TV and you had a video, you had made it."

But what has been overwhelming for him, he said, is the love he has received. "You can't explain that."

Nelly and Eminem took top honors in rap categories. If he should win one, he said, "At this stage, I'll take any. But if they want to give me that Album Of The Year, I'll definitely take it. It's big to be in the company that you're in.

"You know, everybody in that category has had big years, albums still selling, still at the top of the charts, still doing well. So it's going to be a crunch-time decision, I think. up until the buzzer," he said.

"And the Dixie Chicks? Come on, man. They sell albums when they feel like it. You know, to be in that company, that's crazy right there. I don't even think Michael Jackson beat out the Boss. I'm like, come on. You understand? The Boss," Nelly noted.

Syler's favorite is his performance with Kelly Roland in "Dilemma." What was like to work with her?

"Kelly is very beautiful, very talented, too," Nelly said. "I think, for her, it was just a chance for her, showing her individual skills opposed to being in a group. I think everybody knew her talent as well as in a group, Destiny's Child has sold numerous amount of albums and so successful together." And "Dilemma," Nelly said, was the perfect song for her to step out.

As for what his thoughts are when people call him a role model, Nelly said he wouldn't take that title.

Can scented products make you sick?