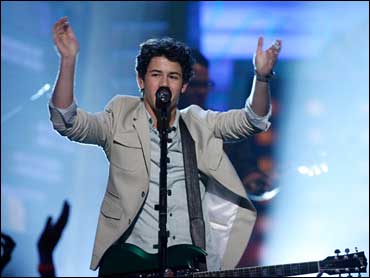 The countdown to music's biggest night kicks off with the live primetime special "The Grammy Nominations Live" tonight on CBS. In its second year, the special mixes performances from Grammy award-winning/nominated musicians with the announcement of nominations in several key categories.

Nick Jonas, one-third of the Grammy nominated Jonas Brothers, will be introduced by brothers Kevin and Joe for the world premiere performance of his new side project, Nick Jonas and the Administration.

The Black Eyed Peas were pumped and ready for a good night. "Look forward to us going out there, having a good time, keeping our fingers, toes, eyes crossed that we get nominated," said Will.I.Am.

Host LL Cool J hopes to prove he still has the pipes to impress the superstars who will be in the audience, such as, Smokey Robinson and Ringo Star, whom he called "the cream of the crop."

Also at rehearsal was six-time nominated Maxwell who's had a critically successful return after a seven year hiatus. He will be paying tribute to Michael Jackson with "Lady in my Life."

"Everyone loves his dancing, uptempo stuff. I've always been the sucker for the romantic ballads that he does," said Maxwell during rehearsals.

Bill Werde, editorial director of Billboard Magazine, shared his thoughts on the upcoming nominations and his personal picks for the top awards.

"I think a lot of people were skeptical about the Whitney comeback. I think there's good reason. She's been through a lot. When you started hearing track after track and it was so good and hitting all of the right notes," he said of possible nominee Whitney Houston.

Best album of the year? According to Werde it should be Maxwell's "Black's Summer Night."

"Beautifully written, beautifully sung, it's been a great comeback for him," he said. However, Maxwell's album might not have done well enough, Werde believes, to have broken through to the mainstream.

Click below to hear more about Bill Werde's thoughts on the upcoming Grammy nominations: