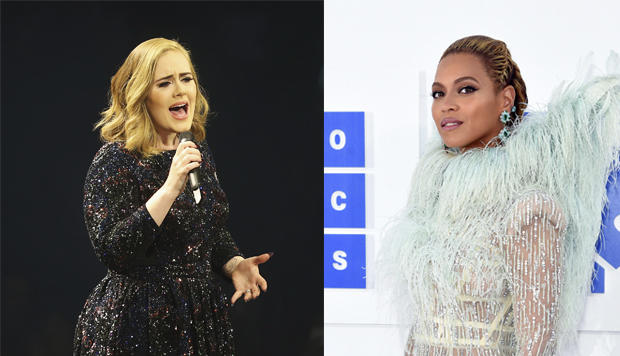 Beyonce and Adele both dominated the major categories for the 2017 GRAMMY Award nominations, with nods in Album of the Year, Record of the Year and Song of the Year.

Between Adele’s “25” and Beyonce’s “Lemonade,” it’s hard to guess who will take home the night’s biggest prizes, but take a look at the numbers to think over.

Total 2017 GRAMMY nominations: Beyonce is up for nine GRAMMY awards this year -- a new record for a female artist -- while Adele is up for five.

Total GRAMMY awards, period: No contest here. Beyonce has 20 GRAMMYs under her belt, while Adele has 10. Depending on how many awards she wins in 2017, Beyonce could become the female artist with the most GRAMMYs and the second artist ever with the most GRAMMY Awards, behind conductor Georg Solti.

Tour sales: As of October, Adele’s Live 2016 tour earned $150 million, according to Billboard. That’s a lot, but it’s not quite up to Beyonce’s level, whose Formation tour had made more than $250 million as of October.

Payday: Forbes ranked Adele higher than Beyonce in terms of pay in 2016. Adele raked in $80.5 million, whereas Beyonce brought in $54 million. However, many of Beyonce’s tour dates fell out of Forbes’ scoring period.

Album sales: As of July, more than 1.4 million copies of Adele’s “25” were sold in 2016, edging out the 1.2 million copies of “Lemonade,” according to Nielsen. However, “25” had been out since last November, while “Lemonade” only came out in April.

Twitter followers: Adele has 27.4 million followers, while Beyonce has 14.6 million. Beyonce is not known to tweet frequently, though.

Just in case you think there’s any sort of unfriendly rivalry, though, Adele herself has said of Beyonce, “Anyone who knows me knows that my main priority in life outside of my child is Beyonce.”