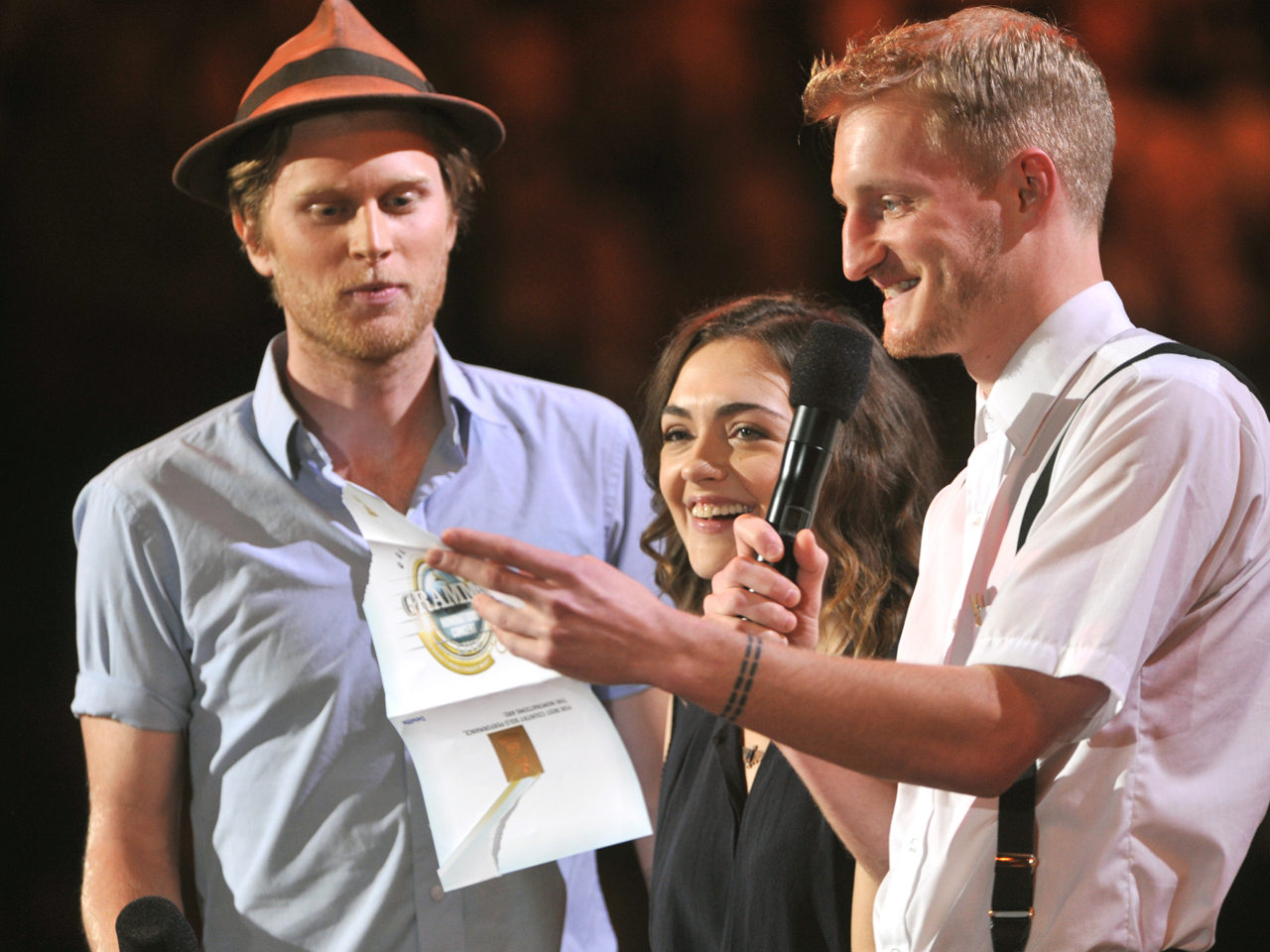 The Lumineers will take center stage at the Grammy Awards on Sunday with a performance and a possible trophy. The Colorado-based group is up for two awards: best new artist and best Americana album for its 2012 self-titled release.

To put it in perspective, last year at this time, the relatively then-unknown band hadn't even released a full-length album yet. By the end of 2012, though, it was hard to escape the group's catchy hit song, "Ho Hey."

During a recent interview prior to an intimate show at New York's iHeartRadio Theater, the members of the Lumineers reflected on the crazy year they've had. The venue, which hosts exclusive concert events, has a capacity of only about 200 people.

"It wasn't that long ago that these were all the shows we were playing," vocalist/cellist Neyla Pekarek told CBSNews.com. "It's only been in the past couple months that we've been playing really big theaters so this is probably a little more comfortable for us, what we're used to anyway."

Thanks to the success of "Ho Hey," The Lumineers have toured larger venues and performed before big crowds at festivals. In other words, the band has been busy.

"It sort of washes over me at times like a tide where I don't feel anything for a long time, I kind of go numb to it because our heads are in the sand a little bit," said singer/guitarist Wesley Schultz. "And then all of a sudden it will hit you that all of these things are happening and I think for me it's a blessing to be this busy because I would probably get lost in my own thoughts and lose some sleep but otherwise I'm just staying busy."

But Schultz and drummer Jeremiah Fraites have been working at it for a while. The New Jersey natives and childhood friends teamed up in 2005, collaborating and playing shows in New York. Faced with a competitive music scene and expensive New York City living, they decided to pick up and move to Denver, Colo. It was there that they linked up with Pekarek and really honed in on their sound. They self-released an EP and booked a tour before putting together the songs that would eventually end up on Grammy-nominated set, "The Lumineers."

"We had made what we called demos after the fact but at the time we were taking it like it was our own presentation of our music," said Schultz. "It was real to us. There was nothing demo about it. We wanted to make something that was a different version of what we had already been doing, I guess, in a nice facility. So we weren't reinventing the wheel with our own sound. We were just doing it with nicer microphones and in a nicer facility."

Call it what you want, but The Lumineers came on the scene in the midst of a roots revival, with mainstream radio playing songs by bands such as Mumford & Sons and Of Monsters and Men.

"I feel like we're the receivers of good timing or something," said Schultz. "We're on the good end of that because there are a lot of bands that sort of preceded this. But the timing of it for us has been special. A lot of bands have paved the way for this style of music to be received the way it is on a larger scale. I think a few years ago you might have never heard of us because that's the landscape of music and how it always changes."

When the Grammys air live Sunday on CBS, The Lumineers will be up against Alabama Shakes, fun., Hunter Hayes and Frank Ocean in the best new artist category. The other Americana album nominees are The Avett Brothers, Bonnie Raitt, Mumford & Sons and John Fullbright.

When asked what it was like to find out about the two Grammy nods in December, Pekarek said, "We were at the nominations show and they asked us to come as presenters so we thought there might be something other than that just because we were cancelling things and we flew out last minute to Nashville for it. We were pretty shocked by it."

The Lumineers will have a busy schedule in 2013, with tour dates booked into the summer.

"It's kind of an adjustment, but at the same time, we're kind of just keeping our heads down and working hard," Shultz said.

Hopefully by the time Shultz and the Lumineers hit the Grammy stage on Sunday, they will be able to look up long enough to take it all in.