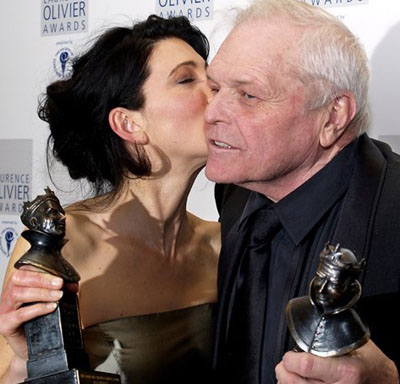 Without a wave or a nod, Steffi Graf said goodbye to Wimbledon.

Graf has won this tournament seven times, and she knew the moment rightfully belonged to Lindsay Davenport, a 6-4, 7-5 winner Sunday on Centre Court.

"I felt it was her day and I wanted to keep it that way and not take anything away from her," Graf said.

Win or lose, Graf said she had decided this match would be her last at the All England Club.

This was Graf's first loss in the Wimbledon finals since 1987, the first time she reached the championship match.

Graf received the runner-up plate from the Duchess of Kent. The duchess, Graf said, was getting used to giving her the winner's plate and hesitated at presenting the second-place award.

Skater to Compete Despite Mother's Death

"It's been a lot of fun but, I guess, yes, there's going to be a certain time when I've got to move on with something else in my life," Graf said softly.

"Right now, I'm a little sad about everything, which is normal for the moment," she added. "But I still think that I feel... a winner getting out of this tournament."

A month ago, after winning the French Open, the 30-year-old German said that was her last appearance at Roland Garros.

Graf also said her U.S. Open appearance was in doubt, although she plans to play several more tournaments. She said she'll address her future in a few weeks.

"I have not had enough time to think about those things," she said.

Graf's announcement leaves Wimbledon without wo of its great champions. Compatriot Boris Becker said after his fourth-round loss that he had played his last Wimbledon.

Graf said she decided before the tournament this would be her last Wimbledon, even if she won.

"I've been pretty sure about it for a long time," she said. "It's not something I just thought about."

The WTA Tour guide devotes one page to most players, two to stars like Monica Seles. Graf gets three.

A list of her major injuries and illnesses put out by the WTA lists 21 almost equaling her Slams since she turned professional in 1982: right foot surgery twice, with other operations on her right hand, left knee, left foot and sinuses. She's also had a herniated disc, and broken her right toe and right thumb.

"That has something to do with all of this," said Graf, who played the final with her left thigh wrapped. She pulled out of mixed doubles with John McEnroe because of that injury.

Her first Grand Slam title was the French Open in 1987. In '88 she won all four Grand Slams, and the next year again reached all four finals, losing only in the French. Three other times she won three of the four Slams ('93, '95, '96).

Personal problems have shadowed her as well as injuries. Her father, Peter, was released from prison in April 1998 after serving 15 months for tax evasion in connection with his daughter's tennis winnings $21 million entering this season.

Graf pointed to her '92 Wimbledon victory over Seles and her '91 win over Gabriela Sabatini as her two most memorable Wimbledon finals.

"I went through a lot of struggles during a certain period," Graf said. "The one match that I played against Gaby for me was personally a big one."

With her father in prison, Graf underwent left knee surgery in June 1997, which kept her out of Wimbledon and the next three Grand Slams. She returned last year but was knocked out in the third round.

"I think the last few weeks have been pretty amazing," she said. "Who would have thought I would be doing so well? It's obvious that I'm disappointed about losing the finals. But I do have to say ... it been tough getting there but it's also been ... great here."