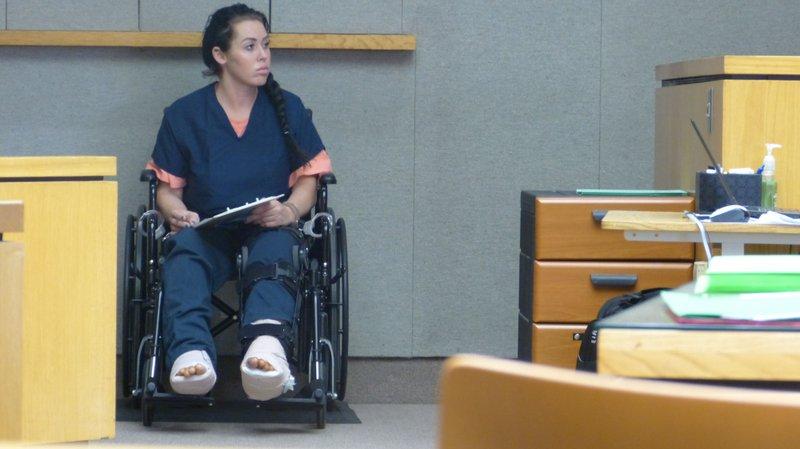 REDDING, Calif. -- A Northern California woman who drove her car head-on into freeway traffic in an alleged suicide attempt has been charged with the second-degree murder of a driver she struck, authorities said Thursday. Grace Elizabeth Ward, 28, suffered a broken leg in the accident that killed Ryan Folsom, a former football player at Brigham Young University, on Interstate 5 earlier this month.

The Red Bluff woman was arrested Tuesday after her release from the hospital and remained jailed on $1.5 million bail.

A public defender was expected to be appointed to her case at her scheduled arraignment on Friday, Shasta County District Attorney Stephanie Bridgett said.

Folsom, 29, was from Medford, Oregon, and attended medical school in San Antonio, Texas. On Jan. 7, he was heading to a hospital in Sacramento to interview for a residency when Ward struck his car.

Ward was driving north on the freeway in Redding when she crossed into oncoming traffic in an alleged attempt to kill herself by running into other cars, Bridgett said.

"She intentionally was driving and swerving towards them," Bridgett said.

Three cars were able to swerve out of the way before Folsom's car was struck, Bridgett said.

The district attorney said Ward made a "selfish" decision that met the legal requirements of second-degree murder.

"She made a choice, a purposeful choice to use her vehicle and driving in a fashion that was reckless and dangerous with a complete disregard" for other lives, Bridgett said.

Folsom was a running back at BYU in Utah, where he studied neuroscience, and attended the University of Texas medical school in San Antonio.

In addition to the murder charge, Ward is charged with three counts of attempted murder and three counts of assault with a deadly weapon for allegedly trying to strike the other three cars, Bridgett said.

She also is charged with felony vandalism for damaging a median strip in trying to cross into oncoming traffic, Bridgett said.

Ward could face life in prison if convicted.

Folsom's  widow is pregnant with their third child. A GoFundMe account raised more than $300,000 for the family.