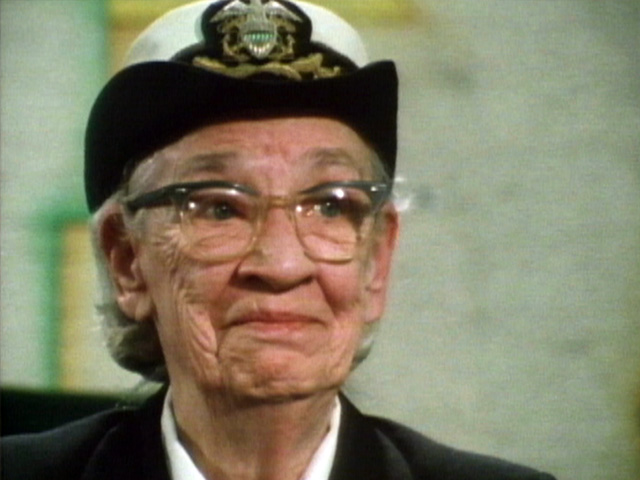 Believe it or not, the world of computers didn't begin with Bill Gates or Steve Jobs.

Back in 1983, Morley Safer sat down with 76-year-old U.S. Navy Captain Grace Hopper who, at the time, had the distinction of being the oldest woman in the Armed Forces. But that was far from the only reason she merited a 60 Minutes profile. Way back in 1944, Hopper helped design the legendary Mark series of computers at Harvard University. (Take a look at the Mark 1 here.)

Hopper is perhaps best known for figuring out the way to make computers "talk." As Morley put it in his piece: "She is more than just a superb mathematical talent; it was Grace Hopper who helped teach the machines a language, stopped them from speaking in undecipherable numbers, enabled them to speak in English or French or German or whatever language you choose."

And, if you've ever used the expression "bug" to describe a computer malfunction or software problem, you've got Ms. Hopper to thank as well. In 1947, something went haywire in the Mark II computer system. Upon closer inspection, a dead moth was discovered in the wiring and removed. From that point on, Hooper said, when anything went wrong with the computer, everyone said "it has a bug in it." (To see the infamous moth in question, click here.)

Not long after this piece first ran on 60 Minutes, Hopper was promoted to commodore, and when that post was merged with rear admiral in 1985, she became Admiral Hopper. She passed away on January 1, 1992 and was buried with full military honors at Arlington National Cemetery.

Today we celebrate what would have been Grace Hopper's 107th birthday.