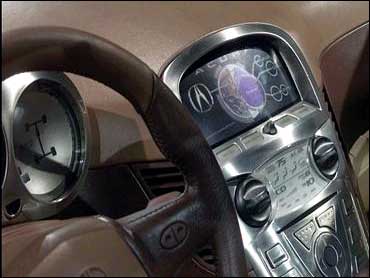 When April Sears rides shotgun with daughter Sarah, she can keep an eye on the 16-year-old's driving habits.

But when Sarah's leaving mom behind, it's a different story. Or is it? CBS News Correspondent Tracy Smith found out for her Study Hall report.

Thanks to a global positioning chip in Sarah's cell phone, April Sears can follow her daughter via computer.

"These blue dots are tracking her," says April Sears, explaining how it works; she can see everywhere her daughter is driving.

As for Sarah, she doesn't have a problem with mom watching her every move.

She says, "I feel a lot safer with it because if anything ever happens to me, it tracks where I go and my mom can go on the computer and know where I'm at."

And more than just where she's driving, mom can know "how" she's driving. As Sarah and April Sears demonstrated for Smith, the system allows parents to set a speed limit for their child.

If she exceeds that speed, Sarah says her phone lets her know with an alert message that says: "This is a Teen Arrive Alive alert you've exceeded your maximum permitted speed, please drive responsibly."

And her mom gets notified as well.

The system is the brainchild of Rob Berry, who created the company, Teen Arrive Alive.

Berry notes, "There are a number of different programs from Save the Whales to Save the Spotted Owl, but there was nothing, there were no solutions to the No.1 reason our kids are dying and that's teen car crashes."

According to the Centers for Disease Control, 40 percent of all deaths among teens in the U.S. result from a motor vehicle crash. The CDC also found that teens are more likely than older drivers to speed, run red lights, and make illegal turns.

Still, not every teenager's so keen on the idea of being watched.

"It would just make me feel like a prisoner or something," says one.

"I think it displays a total lack of trust by the parents," says another.

To that, Berry says, "I think parents need to share with their children that they're doing this because they love them. They want them to live to see their 21st birthday."

As for April Sears, she says knowing where her daughter is and how she's driving gives Sarah more freedom.

April Sears says, "I think it's expanding the things that I'm willing to let her do. I think it gives her a lot more opportunity to learn out there in the big world."