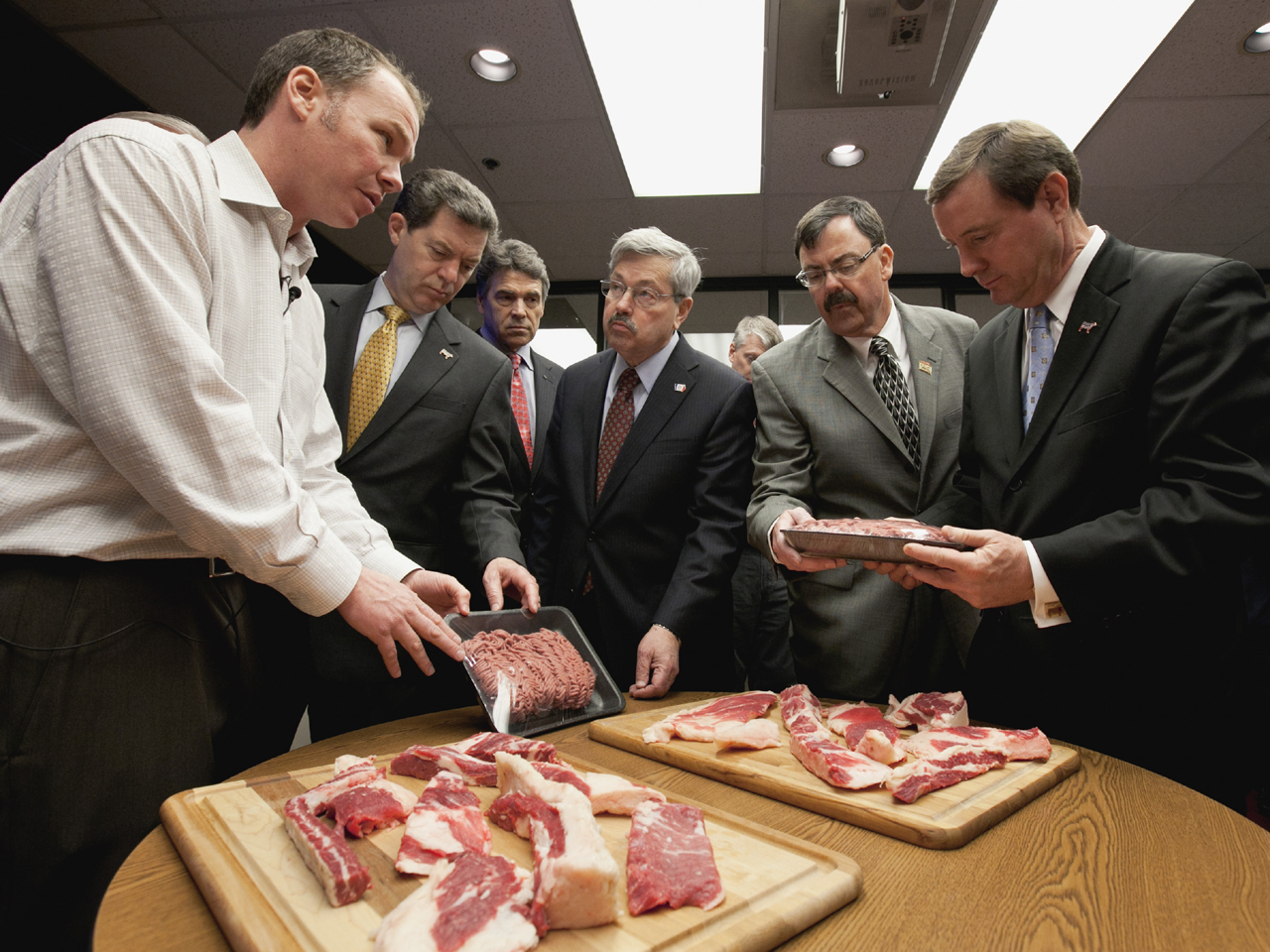 (AP) SOUTH SIOUX CITY, Neb. - Governors of three states got up close with "pink slime" Thursday, touching and examining treated beef at a plant and eating hamburgers made with it in a bid to persuade grossed-out consumers and grocery stores the product is safe to consume.

The three governors and two lieutenant governors spent about a half hour learning about the process of creating finely-textured lean beef in a tour of the main plant that makes the product, then blasted the media for scaring consumers with a moniker coined by critics.

"If you called it finely textured lean beef, would we be here?" asked Kansas Gov. Sam Brownback. Several other leaders echoed his comments as they tried to smooth over consumer concerns about the product.

Beef Products, the main producer of the cheap lean beef made from fatty bits of meat left over from other cuts, has drawn scrutiny over concerns about the ammonium hydroxide it treats meat with to change the beef's acidity and kill bacteria. The company suspended operations at plants in Texas, Kansas and Iowa this week, affecting 650 jobs, but defends its product as safe.

The politicians who toured the plant — Texas Gov. Rick Perry, Brownback, Iowa Gov. Terry Branstad, Nebraska Lt. Gov. Rick Sheehy and South Dakota Lt. Gov. Matt Michels- all agree with the industry view that the beef has been unfairly maligned and mislabeled and issued a joint statement earlier saying the product is safe.

The officials spent about 20 minutes going over the production process in a separate room at the plant with Craig Letch, the company's director of quality assurance, viewing and handling more than a dozen slabs of raw meat and the processed, finished product laid out on cutting boards on a round wooden table.

The officials asked about the added ammonia, which Letch said is used as an extra safety precaution against E. Coli.

"What we're doing with ammonium hydroxide is directly targeting those specific microorganisms that could affect human health. It is nothing more than something to ensure consumer safety," Letch said as the politicians bent over the raw cuts of beef.

The officials donned hard hats, hair nets and goggles for a brief walking tour through the facility. Workers manned conveyor belts of meat cuts that ran from one side of the room to the other in the chilled room; the ammonium hydroxide treatment process was not visible; plant officials say that's because it binds with moisture in the meat in an aerated process.

Afterward, Perry, Branstad and others ate burgers made from the plant's meat at a news conference.

"It's lean. It's good. It's nutritious," Branstad said as he polished off a patty, sans bun.

Larry Smith, with the Institute for Crisis Management public relations firm, said he's not sure the makers of the product — including Cargill and BPI — will be able to overcome the public stigma against their product at this point.

"I can't think of a single solitary message that a manufacturer could use that would resonate with anybody right now," Smith said.

Russell Cross, a former administrator of the USDA Food Safety and Inspection Service, said the product is getting a bad rap from a food safety standpoint.

The finished product contains only a trace of ammonia, as do many other foods, and it's meant just to be an additional "hurdle for the pathogens," said Cross, who is now head of the Department of Animal Science at Texas A&M University.

The ammonium hydroxide BPI uses is also used in baked goods, puddings and other processed foods.

National Meat Association spokesman Jeremy Russell said if consumers insist on eliminating the product from ground beef, prices will go up and lean beef trimmings will have to be imported to replace it. The process of creating lean, finely textured beef yields about 12 to 15 pounds of additional meat per animal.

Russell said the outcry has already hurt BPI and other meat companies, and could eventually hurt the price that ranchers and feedlots receive for cattle.

BPI did get some good news Wednesday when Iowa-based grocer Hy-Vee said it would offer beef with and without pink slime because some consumers demanded the option. But larger grocery store chains, such as Kroger, have stuck with their decisions to stop offering beef with pink slime.

The real test may come later this year when school districts purchase meat from the U.S. Department of Agriculture for next school year. The USDA said earlier this month that it would give school districts a choice between 95 percent lean beef that contains pink slime and less-lean beef without it.

Russell said school districts will have to decide whether they're willing to spend roughly 16 percent more for beef without pink slime.