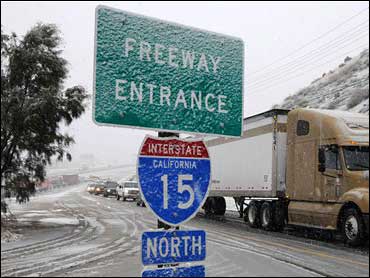 The influential trio met with President Obama at the White House Friday afternoon.

"We all believe that the stimulus program was step one," Rendell said.

The Pennsylvania governor said the three men delivered three messages to the president and his team of advisors. One, that the president should take control of the infrastructure debate. Secondly, that a so-called "infrastructure bank" is essential. And three, that all funding possibilities should be explored.

Calling the meeting "terrific," Schwarzenegger said the three will "go out and to sell this to the American people…Not only does it help us make our economy function better, but also it helps us in creating jobs."

"In order for us to be competitive economically," he said, "we have to do much better on our infrastructure."

"The president gets it," Bloomberg said. "This is about the future of our country. Whether it is transportation or water or other things, we need to invest now so that our children and grandchildren will have a future."

Before the meeting, President Obama called the trio "three of the most innovative elected officials in the country" and lauded their concern for "infrastructure and how we develop the long-term prosperity that's going to be so important for America's success."

Schwarzenegger then admitted to having "many of those" moments personally.

Rendell, known for his politically inconvenient verbal slips, joked that he has never gaffed.