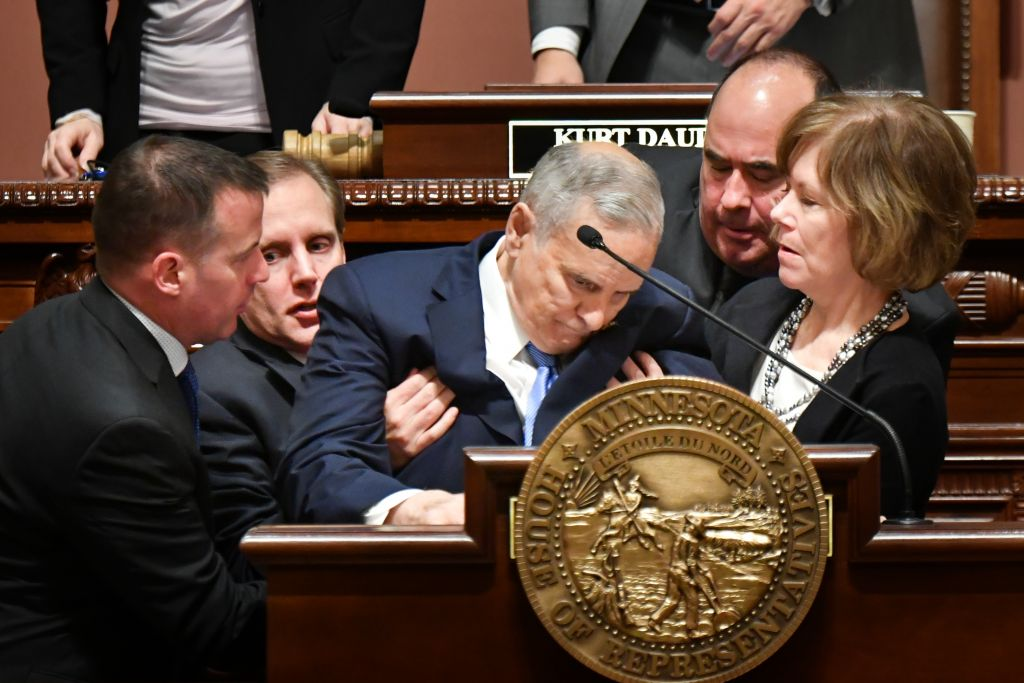 ST. PAUL, Minn. -- Minnesota Gov. Mark Dayton collapsed while delivering the State of the State address on Monday, striking his head on a lectern.

The 69-year-old Democrat appeared to be conscious as he was helped into a back room several minutes later, and a top staffer said he walked out of the Capitol on his own and was spending time with his son and grandson after a routine check by emergency medical technicians at his home.

House Speaker Kurt Daudt said minutes after the incident that Dayton was “up and about” and that the governor would be all right. Sen. Dan Schoen, who is also a paramedic, was among those who went to Dayton’s aid; he said Dayton was acting normally within 20 minutes of the collapse and poking fun at himself.

His son, Eric Dayton, tweeted about his father’s condition, saying: “I’m with my dad now and he’s doing great. Thank you all for your kind well-wishes and words of concern.”

Dayton briefly stumbled while entering the chamber to deliver his address.

He paused to take a drink of water before he appeared to faint as he stepped away from the podium, CBS Minnesota reported. EMTs attended to the governor as he lay on the floor behind the podium.

Nearing his 70th birthday on Thursday, Dayton has a history of health problems. He was hospitalized in February 2016 after he fainted at a hot and crowded event. His office said at the time that he had been feeling pressure in his lower back -- he had undergone elective back surgery the previous December -- before he lost consciousness. Dayton spent just a day in the hospital, and said afterward he had been treated for dehydration.

Dayton has undergone a series of back and hip surgeries in recent years.

The governor fell about three-fourths of the way through his speech as he laid out the opening salvo in a brewing battle with Republican legislative majorities over where to bring the state after November’s elections, including his proposal for a state-run public health care option for all Minnesota residents.

He appeared to lose his place in his remarks roughly 40 minutes into his speech, trailing off in the middle of a sentence before pausing to take a long drink of water. When he tried to resume his address, he spoke only a few slurred words before his shoulders appeared to shake and he crumbled behind the lectern, striking his head.

Daudt and fellow Republican legislative leaders declined to comment on Dayton’s speech, instead only offering their prayers for his health and safety.

Facing a unified GOP front for his final two years in office -- Republicans took back control of the Senate and strengthened their House majority in November -- Dayton increasingly looked to the past as he seeks to cement his legacy.

Dayton entered office in 2011 tasked with solving a $6 billion budget deficit. After a stalemate with Republican majorities led to a 20-day government shutdown that year, he and Democrats united to control the Capitol in 2013. They raised taxes on the state’s wealthiest earners, increased the minimum wage and legalized same-sex marriage.

The state has posted several years of surpluses, and the governor has pointed to that financial stability as a hallmark of his six years in office, insisting he’ll safeguard against a return to painful budget shortfalls.

“In 2010, I campaigned for governor on the promise of a better Minnesota. Now, and two years from now, I expect to be judged by you, the people of Minnesota, on how well I have kept that promise,” he said during his remarks. “In my first inaugural address, I promised that I would ‘clean up the state’s financial mess.’ I have kept my word.”

Dayton was light on details for his own budget proposal, which he was previously scheduled to unveil Tuesday, though he did call for another increase to the state’s per-pupil funding formula in public schools and more funding for early education options. He’s already sketched out his plans for more than $300 million in tax relief that’s heavy on credits for low-income families and farmers and urged lawmakers to approve more than $1 billion in a public construction backlog - the Legislature never passed a major infrastructure package last year.