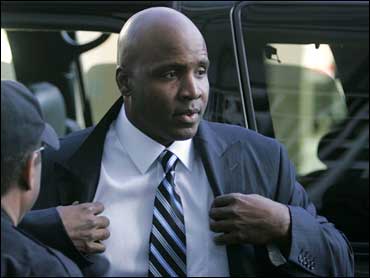 A federal judge on Wednesday unsealed hundreds of pages of court documents at the heart of the government's criminal case against Barry Bonds, including positive drug tests that prosecutors linked to the home run king.

The documents also include a transcript of a taped conversation between Bonds' personal trainer and personal assistant discussing injecting the slugger, plus a list of current and former major leaguers, including Jason Giambi, who are scheduled to testify for the government at Bonds' upcoming trial.

The former San Francisco Giant is charged with lying to a grand jury when he said he never knowingly used performance-enhancing drugs. His trial is scheduled for next month.

The documents unsealed Wednesday are connected to Bonds' efforts to prevent prosecutors from showing the jury much of the government's evidence, including at least four positive steroid tests they argue can't be conclusively linked to Bonds because of how they were processed.

According to records prosecutors took from BALCO, Bonds tested positive on three separate occasions in 2000 and 2001 for the steroid methenelone in urine samples; he also tested positive two of those three times for the steroid nandrolone. Prosecutors want to use those test results to show Bonds lied when he told a grand jury in December 2003 that he never knowingly used steroids.

In addition, a government-retained scientist said he found evidence that Bonds used the designer steroid THG upon retesting a urine sample Bonds supplied as part of baseball's anonymous survey drug testing in 2003. Federal investigators seized them in 2004 from the private laboratory used by Major League Baseball before they could be destroyed, which the players were promised.

Included in the evidence was a letter from baseball independent drug administrator Bryan Smith that Bonds tested positive for an amphetamine during a drug test on July 7, 2006, and a letter from baseball commissioner Bud Selig to Bonds that Aug. 1 informing him of the positive test and telling him that he will be subject to six more tests over a one-year period.

The New York Daily News reported on that test on Jan. 11, 2007, saying Bonds attributed the positive test to a substance he had taken from teammate Mark Sweeney's locker.

The court documents also show that prosecutors plan on calling to the witness stand Giambi of the Oakland A's, along with his brother and former major leaguer Jeremy Giambi. The government also plans to call Bobby Estalella, Marvin Barnard and Benito Santiago, all former Bonds teammates.

Bonds' personal trainer Greg Anderson also worked with those players and maintained so-called doping calendars for them. Prosecutors allege that Anderson maintained a similar calendar for Bonds. They suspect Anderson will refuse to testify at Bonds' trial.

The documents say that in March 2003, Bonds' former personal assistant Stevie Hoskins recorded a face-to-face conversation with Anderson in the San Francisco Giants' clubhouse in which it appears the trainer discussed injecting Bonds. The court papers stated that Hoskins recorded the conversation on his own initiative with no government prompting.

Federal prosecutors said that Hoskins will be a key witness at the trial.

Bonds and Hoskins had a nasty falling out after slugger went to the FBI with accusations Hoskins stole from him.

According to Hoskins, the following conversation excerpt took place between himself and Anderson in approximately March of 2003 at PacBell Park near the defendant's locker.

Anderson: ... everything that I've been doing at this point, it's all undetectable.

Anderson: "See, the stuff that I have ... we created it. And you can't, you can't buy it anywhere. You can't get it anywhere else. But, you can take it the day of and pee ...

Anderson: And it come up with nothing.

Hoskins: Isn't that the same (expletive) that Marion Jones and them were using?

Anderson: Yeah same stuff, the same stuff that worked at the Olympics.

Anderson: And they test them every (expletive) week.

Bonds' attorneys argue "there is simply no portion of what Anderson states in reply to Hoskins' questioning that unambiguously refers to Mr. Bonds."