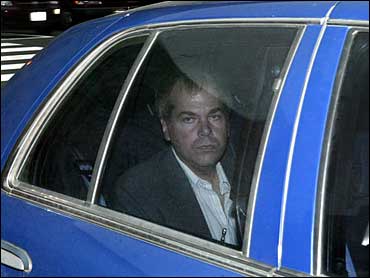 A prosecutor argued Tuesday that John Hinckley still thinks women are making romantic overtures to him when they are not, the kind of misperception that led him to shoot President Reagan 24 years ago.

In federal court, Hinckley's lawyer said the presidential assailant's interactions with women pose no danger to anyone and that Hinckley should be granted extended visits to his parents' home in Virginia.

U.S. District Judge Paul Friedman is considering whether to allow Hinckley to make six trips to his parents' home in Williamsburg, Va., a three-hour drive from the forensic hospital where the presidential assailant has been held.

In 1981, Hinckley was suffering from major depression and a psychotic disorder that led to an obsession with actress Jodie Foster. Hinckley, found not guilty by reason of insanity in 1982, said he shot Reagan to impress Foster.

"He continues to misunderstand his relationships with women," said assistant U.S. attorney Thomas Zeno, who argued against extending Hinckley's visits. What in other people might be simple juvenile behavior "cannot be shrugged off."

Hinckley attorney Barry Levine said the government is engaging in a "prophecy of doom" by asserting that Hinckley has problems with women.

Regarding his interactions with women, "was Mr. Hinckley clumsy? I don't know," said Levine. "But he did nothing that was dangerous."

Hinckley imagined a hospital staff intern was interested in him when she "made good eye contact with him," Zeno said. "He thought there was a personal spark."

The prosecutor said Hinckley also picked up the wrong signals when a hospital chaplain looked at him. "Once again, he thought a woman was interested in him," Zeno said.

The women Hinckley selects when he is at his parents' home "will not be surrounded by a team of experts," said Zeno.