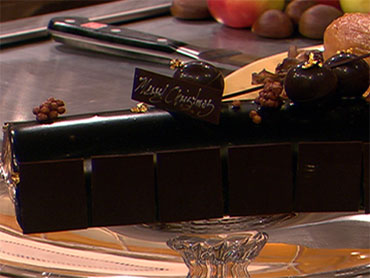 It may be just two days before Christmas, but it's not too late to start preparing your holiday menu.

And Eric Ripert, executive chef at New York's world renowned Le Bernardin restaurant, has you covered with a great gourmet meal featuring some of his favorite Christmas dishes.

METHOD:
Kill the lobsters by plunging a chef knife between the eyes of the lobster and bringing the knife through the head. Set aside.

For the court bouillon, place all the ingredients in a pot except the salt and bring to a boil. Lower the heat and simmer for 15 minutes. Strain and season to taste with salt.

Place the lobster in the boiling court bouillon. Poach for 9-10 minutes.

Remove the lobster and let cool to room temperature.

Meanwhile combine all of the remaining ingredients (except the truffle) in a small bowl.

Split the lobster from tail to head. Remove the meat and discard all of the insides. Remove claw and knuckle from the body and remove the meat. Rinse out the body of the shell under warm water and reserve.

Cut all lobster meat into medium dice and place in a small bowl. Add just enough of the crème fraiche mixture to coat the lobster.

In another small bowl toss the micro greens with the olive oil and season lightly with salt and pepper.
To serve place the lobster meat carefully back in the shell and top it with the micro greens. Serve immediately.
As an option, should you have access to fresh black truffle, you can shave several slices on top of the salad to finish.

Rinse the chicken and pat dry. Remove the wings and reserve.

Heat a large skillet with canola oil over medium heat. Add the garlic and shallots and lightly sweat until soft. Add the mushroom and sauté until tender and golden brown, remove from heat.

Soak the bread in the milk. Squeeze out the excess milk from the bread and place in a large bowl. Add the egg, mushrooms, garlic, shallot, 1/2 cup of chestnuts and parsley. Season with salt and pepper.

Place the wings in a roasting pan and place the chicken on top of the wings. Roast for 40-45 minutes, or until the juices run clear when the leg is pierced and the stuffing reaches 165° F. Remove the chicken to a platter and let it rest at least 10 minutes.

Place the roasting pan over high heat and add the remaining chestnuts and lightly sauté until golden; add the chicken stock to deglaze the pan, stirring the browned bits in the bottom of the pan. Bring to a boil, and then remove from the heat. Season to taste with salt and pepper.

To serve, carve the chicken and slice the breast meat and leg meat. Serve 2 slices of each and a spoon of the stuffing. Spoon the sauce and some of the chestnuts over the plate and pass the extra sauce at the table. Serve immediately.

For a Buche de Noël recipe, go to Page 2.

METHOD:
1. In the bowl of an electric stand mixer fitted with the paddle attachment, combine almond and melted chocolate, mixing until thoroughly combined.
2. Slowly incorporate the whole eggs, a little at a time, scarping the bowl after each addition.
3. Add the honey, followed by the salt.
4. Add the flour, mixing just until incorporated, followed by the melted butter.
5. Transfer to a sprayed and parchment lined quarter sheet pan (13 inches by 9 inches). Place in an oven at 350ºF for approximately 15 minutes, or until thoroughly baked.
6. Allow to cool and cut the cake into one strip measuring 9 inches by 3 inches, and second strip, 9 inches by 2 inches. Reserve for assembly.

METHOD:
1. Combine water, milk powder, corn syrup, and yolks in a small saucepan and very gently cook, whisking constantly, just until thickened and foamy.
2. Add the gelatin, stirring to dissolve, and transfer to a mixer fitted with the whip attachment. Whip until just cool to the touch.
3. Fold the chocolate into the egg yolk mixture and then gently fold in the whipped cream.
4. Line the cake mold with plastic wrap and fill about half-full with the mousse mixture. Using a piping bag, or a spoon, add a narrow layer of the white chocolate cream.
5. Place the 9 inch by 2 inch strip of cake into the mold, pressing gently to avoid air pockets. Add the remaining mousse, allowing enough room in the mold to place the second strip of cake.
6. Freeze for several hours until very firm.

METHOD:
1. In a medium saucepan, combine cream, second measurement of water and sugar. Bring to a boil and hold for two to three minutes.
2. Remove from heat and whisk in cocoa powder, followed by bloomed gelatin and any unabsorbed water.
3. Process with a hand blender until smooth. Allow to cool to slightly warmer than room temperature before glazing, or chill completely and gently warm until fluid.
4. Unmold the frozen cake and place on a grill or rack set onto a baking sheet. Ladle the glaze generously over the top, allowing the excess to run off. Allow to set for a few minutes, then transfer the cake to a serving tray.
5. Allow the cake to thaw to room temperature for about 30 minutes to 1 hour. Decorate as you wish!