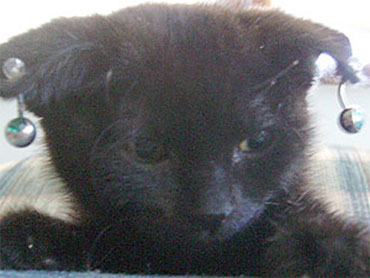 (Personal Photo)
WILKES-BARRE, Pa. (CBS/AP) Holly Crawford thought there was nothing wrong with piercing kitty cats with a 14-gauge needle and selling them as "gothic kittens" over the Internet. But a jury thought otherwise and convicted her Wednesday of animal cruelty.

Crawford was charged in December 2008 after animal welfare officers took several kittens and cats with pierced ears and necks from her home. According to UK Web site The Daily Mail, at least one of the kittens also had an elastic band tied around its tail, in attempts to stem the blood flow so that the tail could eventually fall off.

But Crawford's lawyers drew a comparison to how children are treated.

Her attorneys argued that parents allow children to get pierced ears at young ages, and it would be wrong to hold cat owners to a higher standard.

And while animal rights organizations helped bring the case to trial, most of these organizations prompt pet owners to have their animals neutered or spayed – essentially surgically removing their testicles or in the case of females, their ovaries and uteruses.

Regardless, the Pennsylvania jury wasn't buying any of it. They convicted the 35-year-old on one misdemeanor count and one summary count of animal cruelty. She was acquitted on two separate counts.

Crawford will be sentenced March 31.

WHAT DO YOU THINK? Is kitty piercing animal cruelty?