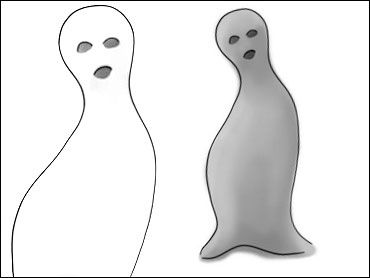 If you study ghosts for a living, the month of October is pretty much like April is for an accountant - busy, busy, busy. Still, Jeff Berlanger found time to come visit The Saturday Early Show and share his insights on paranormal events.

Just in time for Halloween, a new poll by the Associated Press says that about one-third of Americans believe in ghosts. That's no surprise to Belanger, who says he is surprised the figure isn't higher.

Berlanger has spent the last 10 years researching ghost legends, interviewing eyewitnesses, and investigating the paranormal. He's met hundreds of people who tell him their stories about close encounters - even at famous landmarks like the White House and the Tower of London. Jeff has even come close to a supernatural experience himself, while exploring the catacombs of Paris, France.

To find out more about Jeff and his work, you can go to his Web sites, www.ghostvillage.com and www.jeffbelanger.com.

An Early Show producer spoke with him before his appearance:

The Saturday Early Show: HOW DID YOU GET INTO THIS LINE OF WORK?
I've been doing this since 1997. That's when I published my first article for a newspaper I was working at at the time. And I've been hooked ever since! I've been traveling the world researching historic places with ghostly legends. I interview eyewitnesses all the time about their experiences. And you learn pretty quickly who is full of it and who has been moved by something they saw. And my interest has really been stirred by all these stories.

HAVE YOU EVER SEEN A GHOST?
The closest I've come was in the catacombs of Paris, France. I was totally alone. And the catacombs are these ancient limestone quarry tunnels from the Roman-era where they got building materials. But in the 1700s it became a mass tomb. They moved 6 million human skeletons down there because the burial grounds were contaminated. So there are these macabre and intricate patterns of skulls and bones.

And I was walking through there, and I saw a shadow of a man. It moved from left to right in front of me across the tunnel. And this is the closest I've come to my own ghost experience. And I've been back since and I didn't see it again.

HOW MUCH OF "BELIEVING" IS OUR OWN PERSONAL IDEAS AND INFLUENCES?
We all have baggage! It's the way we were raised, whether we were religious or not, the people who we surround ourselves with.

WHAT ARE SOME GHOST STORIES YOU'VE RESEARCHED THAT REALLY STAND OUT?
I've spoken with incredible witnesses. In the Tower of London, these are military soldiers who live and work at this place. And I got to go in after hours and tour it. And everyone I spoke with had some kind of story: "When I was cleaning the chapel one night, all the kneelers were going down one by one - boom boom boom!" Great stories.

I went to the White House and the Secret Service officers were actually very forthcoming about their ghostly experiences. I met the Chief Usher - the guy who runs the place. He's served every President since Nixon and he's spent more time there than anybody, and I heard about his own unexplained experiences: Coming downstairs, and seeing Abraham Lincoln sitting in front of the Lincoln bedroom! And these people work at one of the most secure places in the world where nothing happens there without it being on the schedule!

WHAT DO YOU THINK OF THE POLL NUMBERS THAT SAY ONE-THIRD BELIEVE IN GHOSTS?
Actually, I think the numbers are low! There was a Gallup poll in the early '90s that said something like 30 percent of people believe houses can be haunted. Ten years later, the number went up higher - to 40 percent.

What's so fascinating is that science continues to evolve, and we learn more about our universe, and people continue to evolve and the numbers of people who believe keep getting higher.

HOW DO YOU EXPLAIN THE INCREASE?
I believe it's because people's religious and spiritual beliefs continue to diversify. A hundred years ago, people used to have to go to a certain church or synagogue. It's not like that anymore, but I think spirituality is a basic human need. If you're not getting it at church you're getting it somewhere. What's amazing is that everyone sees ghosts - Jews, Christians, Muslims, Catholics, Atheists! It's like a common denominator.

And when people see that, it tells them that there is life after death. And there is the increasing popularity of the subject. Every network has some sort of paranormal show on. The city of Chicago has five competing ghost tours - Five! People want to go out and learn about these things. It's titillating and intriguing to them.

WHAT ARE YOUR THOUGHTS ON ESP?
There are stories of a glass of water sitting on the counter, just shattering. Or a wall pounding by itself. It's often considered something children have the power to do. And it may be that the child isn't aware that they're doing it. It's not necessarily ghosts coming from the other side.

WHAT ARE YOUR THOUGHTS ON UFOS?
I've just started really researching UFOs. In my opinion, UFOs are not paranormal. One thousand years from now - if we don't blow ourselves up before then - how far evolved will we be? We might be able to visit other planets; I don't think it's really paranormal.

HOW ABOUT CURSES?
I live an hour from Salem, Massachusetts so I know all about spells. And I'm a Red Sox fan - of course we believe in curses!

If you believe in it, it's real. Faith is powerful, it makes things real.

WHAT'S THE BIG PICTURE?
Haunted places can be everywhere. And it's an interesting way to see the world. When you go to the battlefield at Gettysburg - 51,OOO dead or wounded in three days. If you stand there and think about that, you probably will pick up on it. You just get it, that place means something.
I enjoy researching the history. I like to see how far back we can trace the legends.