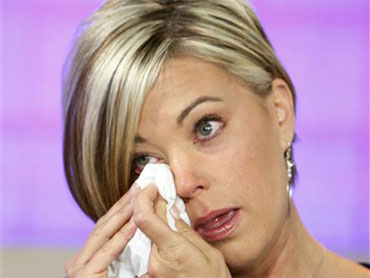 "Jon & Kate Plus 8" is about to be rechristened "Kate Plus Eight."

That's the word from the cable network TLC, announcing Tuesday that its hit reality show will be adapting to changes in the Gosselin household, which for months has been disrupted by the split-up of Jon and Kate.

The renamed "Kate Plus Eight" begins Nov. 2. It will continue to focus on the lives of the young Gosselin twins and sextuplets but with a deeper focus on Kate's role as a single mother.

"It's not a huge shift, but it's reflective of where the show was already going," said Eileen O'Neill, TLC's president and general manager.

"Jon's going to be involved in the show," she said, adding that he will be seen less often than before. TLC retains an exclusive arrangement with him, as well as the rest of the family, O'Neill said.

The couple made their separation official on a "Jon & Kate" episode that aired in June and was seen by 10.6 million viewers.

The rupture came after weeks of tabloid reports of marital strains and infidelities, which both spouses denied. On the show, the parental co-stars barely spoke to each other.

Since then, media coverage of the squabbling exes has continued full-bore, and both Jon and Kate have made separate he-said-she-said talk-show rounds. They are in divorce proceedings.

It's quite a change since the series clicked with viewers two years ago for its heartwarming look at the challenges of raising eight young children.

Going forward, O'Neill said, "We hope for the sake of the family that things are more manageable. I don't think anyone asked for that amount of attention."

She spoke hopefully of a bright future for the series and dismissed a report circulating Tuesday that Kate Gosselin had posted a tweet that this season might be the last: Kate doesn't have a Twitter account, O'Neill said.

Although the audience for recent "Jon & Kate" airings has dropped below two million viewers, the current season has averaged a robust 3.2 million (even omitting its two record-setting "event" episodes), which represents an increase of 300,000 viewers over last season.

Discussions are under way with Kate Gosselin for another series that might debut in 2010, O'Neill said.

"I think there's an opportunity for Kate beyond her role as a supermom to explore her other interests," O'Neill said.

Meanwhile, with reality-based programming that also includes "Little People, Big World," "What Not to Wear" and "LA Ink," the network is boasting a year of consecutive month-to-month audience gains.