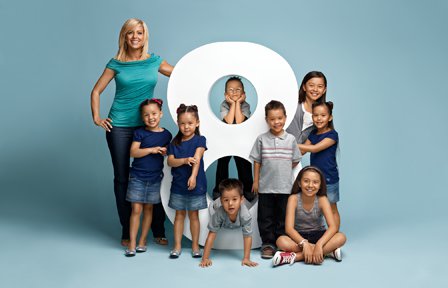 (CBS) What's the solution to the math problem "Kate Plus Eight?"

In Touch magazine is reporting that six-year-old Collin and Alexis Gosselin, two of the famous sextuplets of reality stars Kate and Jon Gosselin, were expelled from school in Pennsylvania, according to the New York Post.

The children "fought with their peers, called them nasty names and made fun of other kids," a source close to the family told the magazine.  "The things they are saying are not words they should know."

Maybe that's not surprising, given the acrimony that reportedly has existed between the children's now-divorced parents.

And Collin and Alexis may not be the only members of the famous brood having a hard time. Other young Gosselins have experienced "rage issues" linked to filming of their reality series, the magazine reported.

Last month Jon Gosselin tweeted: "I will not stop fighting to remove my children from television. It is not a child's job to support themselves, or a lifestyle, they need to be kids," according to the Kansas City Star.

He may be on to something, experts say.

"Being on reality TV, experiencing their parent's divorce, being exposed to social criticisms and still being expected to function - it's a lot to expect," says Dr. Leah Lagos, a psychotherapist in private practice in New York and New Jersey.

Of course, kids are resilient. "The key is making sure that they are given the coping skills needed to deal with the stressors," she says.

If they haven't gotten it already, Lagos says, the Gosselin children might benefit from psychotherapy to help them understand their hostility - and learn ways to cope with it..

The Biden administration has indicated no willingness to sanction the next leader of a vital Mideast ally for a brutal murder. The victim's ex-fiancée says that "will endanger us all."