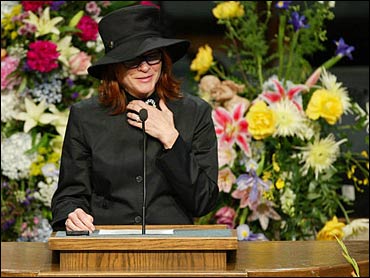 Family, peers and fans at June Carter Cash's funeral Sunday remembered the wife of country great Johnny Cash as compassionate, loving and a music pioneer in her own right.

Her 71-year-old husband, looking somber and composed, was brought into the church in a wheelchair and did not speak at the service. Afterward he was taken to his wife's light blue coffin, which he bent over for a long moment.

"My daddy has lost his dearest companion ... and his soul mate," said Johnny Cash's daughter, Rosanne Cash. "If being a wife were a corporation, June would have been a CEO. It was her most treasured role."

The 2,000-capacity First Baptist Church of Hendersonville was nearly full for the service, which included Gospel music from Larry Gatlin and The Gatlin Brothers, Emmylou Harris, Sheryl Crow and the Oak Ridge Boys.

Actress Jane Seymour, who worked with June Carter Cash on "Dr. Quinn, Medicine Woman," spoke of having "giggling fits" on set, and learning "about acting and love."

A representative of Jamaican Prime Minister P.J. Patterson came to praise the Cashes for their charity work in that country, where they maintain a home.

During an open forum, several fans spoke of the music Carter Cash made on her own and with her husband. She co-wrote (with Merle Kilgore) the Johnny Cash hit "Ring of Fire," which is about their courtship, and joined Johnny Cash for duets including "Jackson."

"I've listened to their music, and it's been almost a religious experience for me," said fan Bill Dewey.