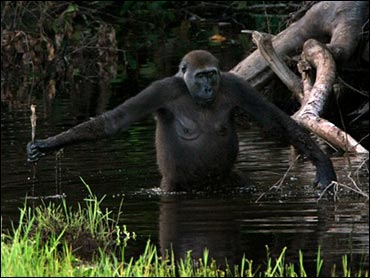 For the first time, biologists have documented gorillas in the wild using simple tools, such as poking a stick in a swampy pool of water to check its depth.

Until now, scientists had seen gorillas use tools only in captivity. Among the great apes, tool use in the wild was thought to be a survival skill reserved for smaller chimpanzees and orangutans.

The research in the Republic of Congo's rainforests was led by Thomas Breuer of the Wildlife Conservation Society at the Bronx Zoo, which released details of his study. Breuer is in Africa and was not immediately available for an interview.

"This is a truly astounding discovery," he said in a statement. "Tool usage in wild apes provides us with valuable insights into the evolution of our own species and the abilities of other species."

Other scientists said the observations were important, but not surprising.

Breuer's observations were made late last year in a marshy clearing called Mbeli Baia located in Nouabale-Ndoki National Park where monitoring has been ongoing since February 1995.

The first instance was observed last October when a female gorilla (nicknamed Leah by scientists) attempted to wade through a pool of water created by elephants, but found herself waist deep after only a few steps. Climbing out of the pool, she retrieved a branch from a dead tree and used the stick to test the depth of the water.

In November, a second female gorilla (named Efi) used a detached tree trunk to support herself with one hand while digging for herbs with the other hand. She also used the tree trunk as a bridge to cross a muddy patch of ground.

Details of the findings are being published in the online journal PLoS (Public Library of Science) Biology. Video of the gorillas will be broadcast Saturday on the PBS program "Wild Chronicles."

Fairly or not, gorillas have been considered less capable than other great apes, in part because they have not been as extensively studied.

Chimps, for example, have been continuously observed in the field for 40 years since Jane Goodall launched her landmark study at Gombe Stream in Tanzania. They have become stars of television documentaries and glossy magazine articles, displaying their extensive of use of rocks to break open hard-shelled nuts and sticks to "fish" termites from mounds.

In contrast, gorillas are much larger, stronger and slower.

"Chimps are portrayed as the super-ape and gorillas are the big brutes in the forest," said Richard Carroll, a primate expert and director of the Africa program at the World Wildlife Fund in Washington, D.C. He has conducted gorilla field studies since 1980. He did not contribute to Breuer's report.

"Gorillas are very intelligent, but they don't have to be as delicate as chimps — they can just smash open the termite nest," said Carroll, who a decade ago reported observing gorillas using sticks to ward off attacking leopards.

"New studies like this show that especially lowland gorillas are very chimp-like in their abilities," he said.

Carroll said the new study was made possible by the establishment of protected parks in Congo by agreements between conservation groups, international agencies and the government. The populations of gorillas and other great apes are severely imperiled by logging, hunting and outbreaks of the Ebola virus. And, civil war in Congo has made field science dangerous for years.

"It's a tribute to conservation efforts that allow people to sit and observe and not be in fear of their lives," he said.