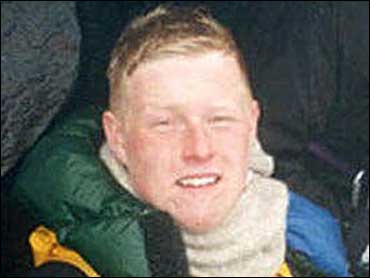 The son of former vice president and 2000 Democratic presidential candidate Al Gore has been charged with marijuana possession.

Albert A. Gore III, 21, was arrested Friday night after he was stopped for driving a vehicle without its headlights on.

Two passengers were also arrested and charged with misdemeanor marijuana possession. They were identified as Yann V. Kumin, 21, and Marc G. Hordon, 22, both of Cambridge, Mass.

A Montgomery County, Md., police officer stopped the car, a dark-colored Cadillac, in Bethesda, a Washington suburb, around 11:30 p.m. Friday.

The officer noticed the car's windows and sunroof were open, despite cold temperatures Friday night. There was also a smell of marijuana coming from the vehicle, according to a news release from the police department.

A search of the vehicle turned up a partial marijuana cigarette, a cigarette box containing suspected marijuana, and a soft drink can that also smelled of marijuana.

All three were released pending trial.

In September 2002, the younger Gore was ticketed for driving under the influence. He was pulled over and ticketed by military police just outside Fort Myer in suburban Virginia, but was not taken into custody.

In the summer of 2000, Gore was cited by the North Carolina Highway Patrol for driving 97 mph in a 55-mph zone. Under an agreement with prosecutors, a reckless driving charge was dropped in the North Carolina case, but he was fined $125 for speeding and his driving privileges in the state were suspended.