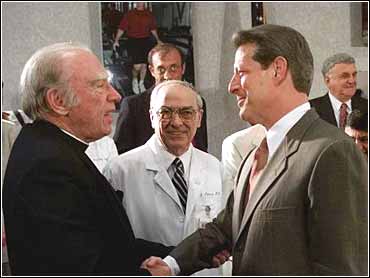 A Roman Catholic bishop barred Al Gore from campaigning at a church hospital Wednesday, forcing the Democratic presidential contender to shuffle his schedule and talk up his health care plans at another site.

Shrugging off the snub, which the bishop linked to Gore's abortion-rights stance, the vice president visited a nondenominational facility and promised more money for health care providers.

He also offered quick help for elderly Americans who need prescription drug coverage and accused pharmaceutical companies of having "too much power" over drug stores and their customers.

Gore's visit to Pennsylvania's coal country, the second stop on his three-week "progress and prosperity tour," offered an abrupt reminder that courting Catholic voters can be a delicate task.

"The Mercy Hospital has decided not to give Vice President Gore a platform, lest there be any misunderstanding about the hospital's Catholic identity and its commitment to the sanctity of life," Timlin said.

The candidate acted as if the snub had never happened, telling the crowd at his backup site, "It was not an accident that I chose this place for the second of my series of speeches" on the economy. Several members of the audience carried local newspapers with a headline reading, "No Mercy for Gore."

Looking for a positive link between Gore and the church, aides gave Monsignor Andrew McGowan a prominent seat at the address. Positioned behind Gore, the Catholic leader was visible for TV and newspaper photographers.

Catholic voters are being pursued by both Gore and Republican rival George W. Bush. They make up a huge voting bloc in the Midwest, where the race likely will be determined. Despite his abortion-rights stance, President Clinton won the Catholic vote in 1992 and 1996.

Gore's focus Wednesday was on health care, and he will promote targeted tax cuts Thursday in Ohio before taking a four-day weekend off.

Pennsylvania, with 23 electoral votes, and Ohio, with 27, are crucial for both major party presidential campaigns. Polls show Bush with a slight lead in Ohio; the race is tighter still in Pennsylvania.

In Pennsylvania, he reiterated his pledge to protect Medicare surpluses, expand children's health insurance programs and add a prescription drug benefit to Medicare.

He promised the drug plan by 2002, moving his deadline up by four years. Gore also pledged to increase funding to health care providers, such as nursing homes, whose federal payments were lowered in the 1997 budget deal.