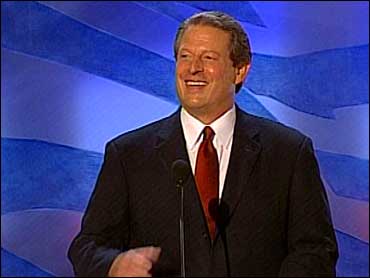 Al Gore criticized President Bush, the man who beat him in the 2000 race for the White House, for his handling of Iraq and the economy, and urged Democratic delegates to channel anger over that disputed election into victory for John Kerry this fall.

"When policies are clearly not working, we can change them. If our leaders make mistakes, we can hold them accountable — even if they never admit their mistakes," said the former vice president, who won the popular vote in 2000 but lost the decisive electoral vote.

The 44th Democratic National Convention opened Monday under extraordinarily tight security as Kerry, who accepts the party's nomination on Thursday, campaigned in Florida. Running mate John Edwards was home in North Carolina, resting his voice and rehearsing for his acceptance speech on Wednesday.

Former President Clinton had the featured prime-time speaking slot on the convention's opening night. Sen. Hillary Rodham Clinton of New York, already viewed as a potential presidential contender for a future campaign, drew the assignment of introducing her husband.

"I know that right now the American public, in my view at least, has decided that they want an alternative to President Bush," Mrs. Clinton told CBS News Anchor Dan Rather. "And this is the opportunity for those of us who know and admire John to help convince a lot more of our fellow citizens to support John Kerry."

Gore won the popular vote in 2000 but lost the White House when the Supreme Court halted a recount of the Florida vote. To those still disappointed, or angry about it, he said, "I want you to remember all of those feelings. But then I want you to do with them what I have done: Focus them fully and completely on putting John Kerry and John Edwards in the White House."

Gore has assailed Mr. Bush sharply the last two years, accusing him of having "twisted values and atrocious policies."

In deference to the wishes of the Kerry campaign, his attacks from the convention podium were more tempered — couched as questions that seemed to suggest their own answers.

"Has the promise of compassionate conservatism been fulfilled? Or do those words now ring hollow," he asked, invoking a Bush campaign slogan from 2000.

"For that matter, are the economic policies really conservative at all? Did you expect, for example, the largest deficits in history ... And the loss of a million jobs."

He raised similar questions about the Bush administration's environmental policies and pursuit of diplomacy.

"Regardless of your opinion at the beginning of this war, isn't it now obvious that the way the war has been managed by the administration has gotten us into very serious trouble?" he asked.

And on the war on terrorism, he said, "wouldn't we be safer with a president who didn't insist on confusing al Qaeda with Iraq."

The delegates gathered amid unprecedented security for the first national political convention since the terrorist attacks of Sept. 11, 2001. The subway station that runs near the FleetCenter was barricaded shut, and armed personnel stood guard along a seven-foot-tall metal security fence that ringed the convention complex.

At the behest of the Secret Service, the city revoked a permit for Operation Rescue and several other anti-abortion groups to demonstrate outside Kerry's Beacon Hill home during convention week.

The groups sued, to no avail. "I'm not going to second-guess the Secret Service's idea of how they feel they need to protect a presidential candidate," said Judge Nathaniel Gorton in denying the request.

"Security is being used to prevent any type of free speech activity," countered Brandi Swindell, national director of Generation Life, one of the anti-abortion groups.

The convention hall was converted into a gigantic sound stage ready for four days of political pageantry, and the Kerry campaign's core message was impossible to miss. The words "A Stronger America" seemed to float by on video screens, and were visible, as well, on emblems affixed to the front of the two speaker podiums.

Kerry underscored the theme that America can be both stronger at home and respected abroad during a campaign stop Monday at Cape Canaveral, Fla. He criticized President Bush as having an almost exclusively military response to Sept. 11.

"Never in 35 years have I seen the United States as much the target, as much sort of derided and disrespected as we are today, where Americans when they travel abroad are at risk," said Kerry, who served as a naval officer in the Vietnam War 35 years ago.

What passed for controversy in Boston was stirred by Kerry's wife. Teresa Heinz Kerry told a persistent reporter on Sunday to

"shove it"
" when he urged her to expand on her call for more civility in politics.

"I think my wife speaks her mind appropriately," Kerry told reporters who asked about the exchange between his wife and the editorial page editor of the Pittsburgh Tribune-Review.

Kerry, who runs even to slightly ahead of President Bush in pre-convention polls, is not scheduled to arrive in Boston until Wednesday night. He planned to watch the convention's opening night speeches from a hotel room in Norfolk, Va., where he will speak Tuesday. Kerry's campaign plane had problems with an auxiliary power unit that starts the engines, so he made the trip on another chartered plane.

Kerry also plans to campaign in Philadelphia before reaching Boston.