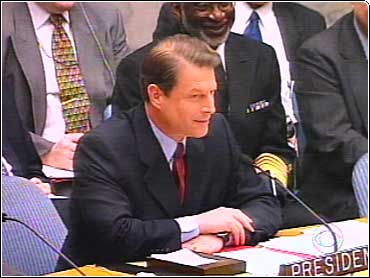 "AIDS is a global aggressor that must be defeated," Gore said.

CBS News Chief White House Correspondent John Roberts reports that nowhere in the world is the problem of AIDS more devastating than in Africa, where close to 1 in 10 people are infected. With little access to Western drugs, most of them will die.

"It will result in the deaths of more people in the first decade of this new century than all the soldiers killed in all the wars of all the decades in the last century," Gore said in an interview with CBS News.

Gore picked a fortuitous time to come to the U.N. - two weeks before the first nominating contests - and when it was America's turn to run the meeting.

"Thank you Mr. vice president. Or should I say Mr. president of the Security Council," said U.N. Secretary-General Kofi Annan said to laughter.

But Gore's address was no laughing matter to Democratic presidential rival Bill Bradley - who has criticized Gore's use of the Executive office during the campaign.

"You arrive on Air Force II and use the whole power of government to promote a candidacy - that's entrenched power," Bradley said.

But with a straight face, Gore contended that Monday's appearance at the UN was not to his political advantage.

"Every single campaign and political adviser I had said, 'Hey, your time is better spent in Iowa and New Hampshire,'" Gore said. "Today, this is not a bad thing to do, but it's not the most politically advantageous thing to do."