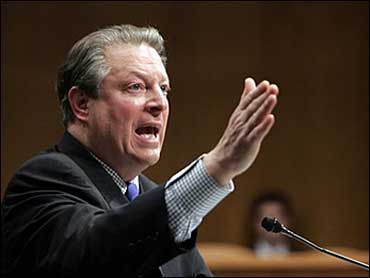 Al Gore made an emotional return to Congress Wednesday to plead with lawmakers to fight global warming with moral courage while revealing nothing about whether he'll join the 2008 presidential race.

The former vice president is a Democratic favorite for the presidential nomination even though he says he's not running.

"At this point, Al Gore says he's not running for president and I think you can take him at his word on that," CBS News chief Washington correspondent Bob Schieffer said.

But, he added, "Al Gore has been running for president all his life. If things break in a certain way for him — in other words, Democrats don't seem all that happy with their front-runners they have now — I think Al Gore will get into the race."

The possibility of Gore getting into the race could explain why Hillary Clinton didn't gush over him like her fellow Democrats, reports CBS News correspondent Gloria Borger.

Fresh off a triumphant Hollywood appearance in which his climate-change documentary, "An Inconvenient Truth," won two Oscars, Gore drew overflow crowds as he testified before House and Senate panels about a "true planetary emergency."

He said the issue should not be partisan or political, but Gore faced skeptical Republicans who questioned his personal commitment to reducing energy usage and the science behind his film.

"You're not just off a little, you're totally wrong," said Texas Rep. Joe Barton, the leading Republican on the House Energy and Commerce Committee, as he challenged Gore's conclusion that carbon dioxide emissions cause rising global temperatures. Barton and Gore's exchange grew testy at one point — Barton demanding that Gore get to the point and Gore responding that he would like time to answer without being interrupted.

But Americans now believe global warming is a real problem, so not as many Republicans are mocking Gore as they once did, reports Borger.

Gore insisted that the link is beyond dispute and is the source of broad agreement in the scientific community.

"The planet has a fever," Gore said. "If your baby has a fever, you go to the doctor. If the doctor says you need to intervene here, you don't say, 'Well, I read a science fiction novel that told me it's not a problem.' If the crib's on fire, you don't speculate that the baby is flame retardant. You take action."

Gore's congressional testimony marked the first time he had been to Capitol Hill since January 2001, when he was the defeated Democratic presidential nominee still presiding over the Senate in his role as vice president. It comes 20 years after Gore, then a congressman from Tennessee, held the first hearings in Congress on global warming.

It also brought him face-to-face with Clinton, who could have her front-runner status threatened if Gore decides to challenge her for the party nomination. But there was no political fireworks between them at the Senate Environment and Public Works Committee hearing.

Clinton said she found some of Gore's ideas "extremely intriguing" and asked for more details on proposals such as a carbon-based tax, a cap-and-trade system and a carbon neutral mortgage association.

In a day of testimony, Gore first appeared before a joint hearing by two House committees, with his wife, Tipper, sitting behind him and a stack of boxes beside him containing hundreds of thousands of messages asking Congress to act on global warming. Later, he testified before the Senate panel where partisan bickering grew even louder.

Republican Sen. James Inhofe of Oklahoma, who has labeled global warming a hoax, complained that the Democratic leadership gave Gore extra time and advantages not afforded typical witnesses. Inhofe then grilled Gore about his personal energy use at his Tennessee mansion and showed the final frame of Gore's film that read, "Are you ready to change the way you live?"

When Gore tried to respond at length, Inhofe cut him off.

Democratic Chairwoman Barbara Boxer kept trying to bring order to the hearing. She told Inhofe he can't control things anymore now that Republicans have lost their majority. "Elections have consequences, so I make the rules," she said, holding up her gavel to cheers from the audience.

Gore sighed heavily and proposed that he and Inhofe have breakfast and privately discuss it away from the cameras.

Gore said he hopes whoever is elected president in 2008 "can use his or her political chips" to lead the world toward a new global climate treaty to replace the 1997 Kyoto protocol that requires 35 industrial nations to cut greenhouse gases. The Bush administration argues Kyoto would hurt the U.S. economy and objects that high-polluting developing nations like China and India are not required to reduce emissions.

"I fully understand that Kyoto, as a brand if you will, has been demonized," Gore said.

Gore was warmly welcomed back by some of his critics, such as Rep. Ralph Hall, R-Texas, who remembered serving with Gore's father and bantered with Gore about an evening boat ride they took together. "You're dear to us, but I just don't agree with you on this," Hall said.

Gore advised lawmakers to cut carbon dioxide and other warming gases 90 percent by 2050 to avoid a crisis. Doing that, he said, will require a ban on any new coal-burning power plants — a major source of industrial carbon dioxide — that lack state-of-the-art controls to capture the gases.

He said he foresees a revolution in small-scale electricity producers for replacing coal, likening the development to what the Internet has done for the exchange of information.

"There is a sense of hope in this country that this United States Congress will rise to the occasion and present meaningful solutions to this crisis," Gore said. "Our world faces a true planetary emergency. I know the phrase sounds shrill, and I know it's a challenge to the moral imagination."