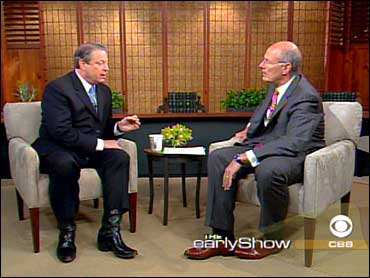 Al Gore's loss to George Bush in 2000 is still hotly debated in some circles.

But he says there's no debating the existence of global warming.

"The debate among scientists is over," he told co-anchor Harry Smith on The Early Show Wednesday. "There is no more debate. We face a planetary emergency. And the phrase sounds shrill but it is an accurate description of the climate crisis that we have to confront and solve."

Gore's 2000 defeat freed him to spread the word on global warming, an issue he's passionate about.

He stars in a new documentary about it that's generating plenty of buzz.

"An Inconvenient Truth" was the toast of the just-concluded Cannes Film Festival. It's been blowing away many other contenders at the box office on an attendance-per-screen basis.

And bootleg video of Gore's May 13 appearance on "Saturday Night Live" has been downloaded by thousands of Web users.

Gore has taken on the role of road warrior for the environment, going from town to town and nation to nation, emphasizing the scope of what he views as the real and present danger global warming poses to all of us.

"I am Al Gore. I used to be the next president of the United States of America," is a joke he uses to start serious lectures about the issue.

In "An Inconvenient Truth," which is also out in book form, Gore says: "The Arctic is experiencing faster melting. If (the arctic ice) were to go, sea levels worldwide would go up 20 feet." And the World Trade Center memorial site would be under water.

Some say Gore is the latest political "Comeback Kid."

"It started with the 'Saturday Night Live' appearance," says CBS News political analyst Craig Crawford, "then this movie that he's done on global warming. … Al Gore is somewhat vindicated in the minds of a lot of Democratic voters, as George Bush has become so unpopular."

Will Hillary Clinton, widely viewed as the present frontrunner for the Democratic presidential nod in 2008, soon have a former vice president to contend with on the campaign trail?

Gore told Smith Wednesday that the answer is "No."

"I don't have any plans to run," Gore said. "I'm not thinking about running. I don't expect to ever be a candidate again. I haven't made a so-called 'Shermanesque' statement that for the rest of my life, I'll never, ever think about that. But that exception is just my own internal shifting of gears. I'm not trying to be coy or anything.

"I am involved in a campaign, but it's not for a candidacy. It's for a cause."

Gore says he's been "trying to tell this (global warming) story for 30 years," and there's no doubt global warming is real.

"I guess," Gore said, "in some quarters, there's still a debate over whether the moon landing was staged in a movie lot in Arizona, or whether the Earth is flat.

"And there may be some media reports that are constructed in a way that says on the one hand, on the other hand. But really and truly, global warming is (real). There is no more scientific debate among serious people who've looked at the evidence."

In the film, Gore uses charts to show global warming could get bad enough to result in a cataclysmic conclusion.

"What makes this hard to absorb," he commented to Smith, "is that our relationship as human beings to the planet we live on has been radically transformed just in the last century or so. We've quadrupled our population. Our technologies have become thousands of times stronger. And the combination has created this collision between civilization as we're now pursuing it and the ecology of the planet.

"The most vulnerable part of the planet's ecological system is its very thin shell of atmosphere around the earth. And we're now filling that up with so much global warming pollution that it's trapping a lot more of the sun's heat inside the atmosphere, melting almost all the mountain glaciers. The North Pole is starting to melt. It's threatening to change the patterns of wind currents, and ocean currents, and where the droughts get stronger.

"The climate system usually moves very slowly, so slowly we can't even perceive it. But in the ancient history of the Earth, there have been times when there have been sudden shifts. And it's like poking a wild animal with a stick: It may wake up. And the climate can, with so much pollution, flip into a different pattern that would not be sustainable for us."

Smith observed that, in "An Inconvenient Truth," Gore seems "so comfortable in your own skin. You look like 'Al Gore in full,' as it were. Is there something about this time in your life that you feel like you say what you want to say, do what you want to do, sort of unencumbered by thoughts of political office?"

"Well, you know, I think there's a lot about the political system that I don't like," Gore responded, "but I respect those who are in it. And they have an obligation on this issue. Where I myself am concerned, it is a luxury to be able to focus just on a passionate expression of what the truth of this is all about.

" 'An Inconvenient Truth' is not political. It's factual. And it is designed to help change the minds of the American people by putting before everybody, in the movie and the book, a clear and, I hope, entertaining description of exactly what our circumstances are. And I see it as an 'action movie,' because it's designed to get the audience to take action. We really do have to cross a tipping point, beyond which the politicians in both parties will take this and go with it."