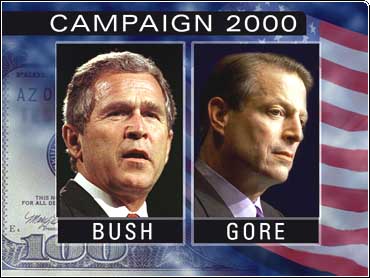 Democrat Al Gore said Saturday the Confederate flag should come down from public buildings because it divides Americans. The vice president also accused the GOP presidential front-runner, George W. Bush, of dodging the issue to satisfy supporters who have "pretty obsolete and even hateful attitudes."

Gore, in a CNN interview with Jesse Jackson, said the flag represents "for many Americans a hurtful message that recalls the pain of slavery" and it should not be flown from the South Carolina Statehouse or other public buildings.

"The citizens of goodwill everywhere must take a position on it and see that in fact the American flag heals us and the Confederate flag divides us," he said.

In an earlier breakfast speech, Gore criticized the Republican presidential field generally on the flag issue.

"It's troublesome to me that so many of the Republican candidates have spoken out against affirmative action and have been silent about the flying of the Confederate flag over the South Carolina Statehouse, which is obviously hurtful to so many Americans."

Republican candidates competing in the Feb. 19 South Carolina primary are asked about the issue nearly every time they visit the state. Texas Gov. Bush says the question is for people in South Carolina to decide, a point reinforced by his campaign after Gore's criticisms.

"The governor has a position, and his position is that the people of South Carolina can figure the issue out," Bush spokeswoman Mindy Tucker said.

Tucker also renewed criticisms that Gore campaign manager Donna Brazile has stoked racial divisiveness and said if Gore wants to upbraid people on race, he should start with her.

Arizona Sen. John McCain, who normally speaks off-the-cuff, took the unusual step last week of reading from a prepared statement to say many in South Carolina view the flag as a "symbol of heritage." That phrase is used by some Republicans who want the flag to continue flying over the Statehouse.

Gore said on "Both Sides with Jesse Jackson," taped Saturday for broadcast Sunday, that some Republicans have expressed hurtful language in the flag debate, apparently referring to a South Carolina state senator who called the NAACP the "National Association for Retarded People."

"I think there is too much tolerance of intolerance," Gore said. "And I think that that flag should be removed from the state capitol."

He added: "I think that he, Governor Bush, has avoided taking a position, or has ducked the issue because he is playing to some of his supporters that, I think, have some pretty obsolete and even hateful attitudes." Some flag supporters, as minorities see it, "want to express views of racial superiority and support for discrimination," Gore said.

Tucker said Bush has in fact repudiated the comments of the state senator. "It was an offensive thing to say,"> she said. "It shouldn't have been said."

"If the vice president is going to begin chastising people for their comments, he needs to start with his own campaign manager, who made racist comments recently," she said.

She was referring to comments by Brazile, who said Republicans "would rather take pictures with black children than feed them" and accused them of using Gen. Colin Powell and Rep. J.C. Watts of Oklahoma, two of the most prominent blacks in the GOP, to improve their image with minorities.

In his interview with Jackson, Gore said that as president he would sign an executive order outlawing racial profiling in police work.