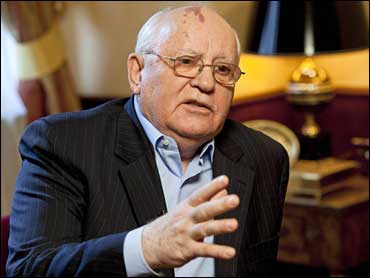 In some of his strongest criticism of his successors, Mikhail Gorbachev has likened Vladimir Putin's United Russia party to the worst of the communists he once led and helped bring down, and said Russia is today a country where the parliament and the judiciary are not fully free.

In an interview Thursday with The Associated Press some 20 years after the Soviet empire started its rapid collapse on his tumultuous watch, Gorbachev also said the global economic crisis showed capitalism should be tempered with elements of the socialist system he played such a critical role in sweeping away.

The last Soviet leader was interviewed in the offices of his Gorbachev Foundation, a think tank founded in 1992 to promote "democratic values and moral, humanistic principles" - as well as, some say, Gorbachev himself. A little aged and more heavyset perhaps, Gorbachev, 78, seemed feisty, friendly and often reminiscent of the man who once ruled one of two superpowers on Earth.

Gorbachev is a paradoxical figure even after all these years - widely credited around the world with a historic convulsion he admits he did not intend. He sought to fix communism, not destroy it, and in the interview said that while he was willing to let Eastern Europe go its own way he very much hoped the republics that formed the Soviet Union would stay united.

"I was a resolute opponent of the breakup of the union," said Gorbachev, who was forced to step down on Dec. 25, 1991, as the country he led ceased to exist.

He still holds out hope that one day Ukraine, Kazakhstan and Belarus will join with Russia in forming a new union.

He seemed to view the global meltdown as partly the result of years of Western hubris and excess.

"The American media trumpeted ... about the victory in the Cold War, that socialism is down. This disease of extreme self-confidence led to it - the (belief) that things would always go on this way. And it did last long ... I think that now everyone is learning a hard lesson."

"It is necessary to overcome these mistakes of super-consumerism, of super-profits." he said. "We have to think about finding - through the G-20 or other institutions - new models of development (and) cooperation."

The world should look for a composite system, he said, which incorporates "the past experience of all that the capitalist system brings, like competitiveness, and what socialism gives - especially a social safety net."

Gorbachev also said the moment was right for improved U.S.-Russia relations, expressed skepticism about the wisdom of Ukraine joining NATO, and called on the world community to head off the prospect of an Iranian nuclear weapon not with confrontation but rather "a maximal dialogue."

"Let (Iran) integrate itself into the global community, build normal relations," he said.

Gorbachev had harsh words for the current Russian leadership, singling out United Russia, the party Prime Minister Vladimir Putin has built into a political juggernaut at the center of a tremendously centralized - albeit popular - power structure.

"I criticize United Russia a lot, and I do it directly," the last Soviet leader said. "It is a party of bureaucrats and the worst version of the CPSU" - the Communist Party of the Soviet Union. "Regarding our parliament, I cannot say that it is independent (and) also our judiciary does not fully comply with the provisions of the constitution."

Is the world waiting for such advice? If there are takers, most will be outside Russia, where he has become a rather marginal political figure: For every Russian who appreciates his role in ending communism there are certainly many more inclined to blame him for the privations of the process he unleashed: the impoverishment many suffered in the 1990s, the vastly unequal distribution of wealth that bedevils society even today, the failings of Russian democracy - and the humiliating loss of the once-vast empire ruled from the Kremlin.

Asked about the fateful Nov. 9, 1989, when the Berlin Wall fell, Gorbachev said that he never contemplated force to stop the process that within months saw most of the Warsaw Pact break free. He said it was inevitable that the states of that region would be free to do as they wished.

Yet even in Eastern Europe, as the region gears up to celebrate the 20th anniversary of the fall of communism, Gorbachev gets only the rarest of mentions and he is forced to share credit for the revolution with a slew of others - Poland's Lech Walesa, Vaclav Havel, Ronald Reagan and the late Pope John Paul II.

"We live more freely now than in the communist era because of what he did and achieved," said Peter Nagy, a 37-year-old public employee in Budapest. "However, he was still the leader of a dictatorial system, not a democrat. I would not accept him today as a leader."

Havel, the former Czech president, in his memoirs "To the Castle and Back" described Gorbachev as both a special and tragic case and said the collapse of communism would have been much more violent without him.

In Warsaw, former anti-communist dissident Adam Michnik said he feels "great gratitude" toward Gorbachev. "I don't have the slightest doubt that it was Gorbachev and his policy of glasnost and perestroika that opened the gates for the great changes that first took place in our country and then in this part of the continent," Michnik said.