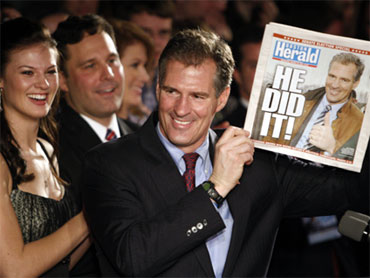 In a major upset, Republican Scott Brown on Tuesday captured the U.S. Senate seat held by liberal champion Edward M. Kennedy for nearly a half century, leaving President Barack Obama's health care overhaul in doubt and marring the end of his first year in office.

Brown's defeat of once-favored Martha Coakley for the Massachusetts seat was a stunning embarrassment for the White House after Obama rushed to Boston on Sunday to try to save her candidacy. Her defeat signaled big political problems for the president's party in November when House, Senate and gubernatorial candidates are on the ballot.

More immediately, Brown will become the 41st Republican in the 100-member Senate, which could allow the Republicans to block the president's health care legislation and the rest of Obama's agenda. Democrats needed Coakley to win for a 60th vote to thwart Republican procedural maneuvers to block votes on legislation.

Analysis from CBSNews.com:
Scott Brown's Victory: What Does it Mean?
Win Shows It's Not a Good Time to Be a Democrat
Scott Brown's Keys to Success

The election transformed reliably Democratic Massachusetts into a battleground state. One day shy of the first anniversary of Obama's swearing-in, it played out amid a backdrop of animosity and resentment from voters over persistently high unemployment, industry bailouts, exploding federal budget deficits and partisan wrangling over health care.

For weeks considered a long-shot, Brown, a little-known state senator, rode that wave of bitterness to draw even with Coakley, the state attorney general, in the final stretch of the campaign. Surveys showed his candidacy energized Republicans while attracting disappointed Democrats and independents uneasy with where they felt the U.S. was heading.

"I have no interest in sugarcoating what happened in Massachusetts," said Sen. Robert Menendez of New Jersey, the head of the Senate Democrats' campaign committee. "There is a lot of anxiety in the country right now. Americans are understandably impatient."

Brown will finish Kennedy's unexpired term, facing re-election in 2012. Brown will be the first Republican senator from Massachusetts in 30 years.

"Throughout this race we had the machine scared and scrambling and for them it's just the beginning of an election year filled with many, many surprises," Brown said in a swipe at the ruling party in his concession speech.

"One thing is very, very clear as I travel throughout the state," he said. "People do not want the trillion dollar health care plan that is being forced on the American people."

Brown continued rallying the conservative base, touching on terrorism and the military.

"Our constitution and laws exist to protect this nation," he said. "Let me make it very, very, very clear: They do not grant rights and privileges to enemies during wartime. … Our tax dollars should pay for weapons to stop them and not lawyers to defend them."

Coakley called Brown conceding the race, and Obama talked to both Brown and Coakley, congratulating them on the race.

"Although our campaign ends tonight we know that our mission continues and our work goes on," Coakley said in a concession speech. "I am heartbroken at the result and I know that you are also but I know that we will get up tomorrow and continue this fight even with this result tonight."

She said she knows "there will be plenty of Wednesday morning quarterbacking about what happened" and that she would be "brutally honest" in assessing her own mistakes in the race.

Democratic fingerpointing began more than a week ago as polls started showing a tight race, with the White House accusing Coakley of a poor campaign and the Coakley camp laying at some of the blame on the administration.

President Obama campaigned personally for Coakley on Sunday, urging Democrats to get out and vote, and he also appeared in an eleventh-hour TV commercial on behalf of the attorney general.

Turnout was relatively heavy for a special election despite a mix of snow and rain showers across the state virtually all day.

"Although I am very disappointed, I always respect the voters' choice," Coakley said, wishing Brown "good luck in his public service."

The loss by the once-favored Coakley for the seat that the late Sen. Edward M. Kennedy held for nearly half a century signaled big political problems for the president's party this fall when House, Senate and gubernatorial candidates are on the ballot nationwide.

More immediately, Brown will become the 41st Republican in the 100-member Senate, which could allow the Republicans to block the president's health care legislation and the rest of Obama's agenda. Democrats needed Coakley to win for a 60th vote to thwart Republican procedural maneuvers to block votes on legislation.

The election transformed reliably Democratic Massachusetts into a battleground state. One day shy of the first anniversary of Obama's swearing-in, the election played out amid a backdrop of animosity and resentment from voters over persistently high unemployment, industry bailouts, exploding federal budget deficits and partisan wrangling over health care.

In contrast to the light turnout for the party primaries last month, the state saw heavy turnout following the national attention thrust upon their race.

From the votes counted so far, it appears Brown did well in the working class areas outside Boston, the non-affluent suburbs, and much better than expected in the western parts of the state, reports CBS News polling expert Anthony Salvanto. Given the high turnout in the rest of the state, Coakley did not get the turnout she would have needed in Boston.

Massachusetts has a liberal reputation, but a full half of voters here are registered independent. Despite his conservative record, Brown has been tapping in to that independent streak, reports CBS News correspondent Nancy Cordes.

Though he wasn't on the ballot, the president was on many voters' minds.

"I voted for Obama because I wanted change. ... I thought he'd bring it to us, but I just don't like the direction that he's heading," said John Triolo, 38, a registered independent who voted in Fitchburg.

He said his frustrations, including what he considered the too-quick pace of health care legislation, led him to vote for Brown.

But Robert Hickman, 55, of New Bedford, said he backed Coakley "to stay on the same page with the president."

Across Massachusetts, voters who had been bombarded with phone calls and dizzied with nonstop campaign commercials for Coakley and Brown gave a fitting turnout despite intermittent snow and rain statewide.

Even before the first results were announced, administration officials were privately accusing Coakley of a poorly run campaign and playing down the notion that Obama or a toxic political landscape had much to do with the outcome.

Coakley's supporters, in turn, blamed that very environment, saying her lead dropped significantly after the Senate passed health care reform shortly before Christmas and after the Christmas Day attempted airliner bombing that Obama himself said showed a failure of his administration.

While votes were still being cast, White House spokesman Robert Gibbs said the president "was both surprised and frustrated ... not pleased" at how competitive the race had become in the final weeks.

National issues including health care and the federal budget deficits were on voters' minds.

"We don't want health care just for the rich and the middle class. We need it for everyone," said Democrat Neicei Degan, 82, who voted for Coakley in hopes of saving Obama's plan that would extend coverage to millions of uninsured.

Fears about spending drove Karla Bunch, 49, to vote for Brown. "It's time for the country, for the taxpayers, to take back their money," she said.

For others, feelings about the candidates themselves shaped their votes.

Recalling that Brown once posed nude for Cosmopolitan magazine, Kaitlin Addams, 50, said she reluctantly voted for Coakley "to make sure the pinup boy doesn't get into office. I don't like his stand on issues. He's an extreme conservative."

Conversely, Elizabeth Reddin, 65, voted for Brown because she said she was turned off by the Democrat's negative advertisements, saying: "The Coakley stuff was disgusting."

As polls opened, Brown drove up to his polling place in Wrentham in the green pickup truck that came to symbolize his upstart, workmanlike campaign that in the past week pulled him into a surprise dead heat in polls.

"It would make everybody the 41st senator, and it would bring fairness and discussion back to the equation," the state senator said of a potential victory. He spent the rest of the day out of public view, crafting evening rally remarks that had the potential to be an early State of the Union speech for the national Republican Party.

Coakley, stunned to see a double-digit lead evaporate in recent weeks, counted on labor unions and reawakened Democrats to turn out on her behalf and preserve a seat Kennedy and his brother, President John F. Kennedy, held for over 50 years. The senator died in August of brain cancer.