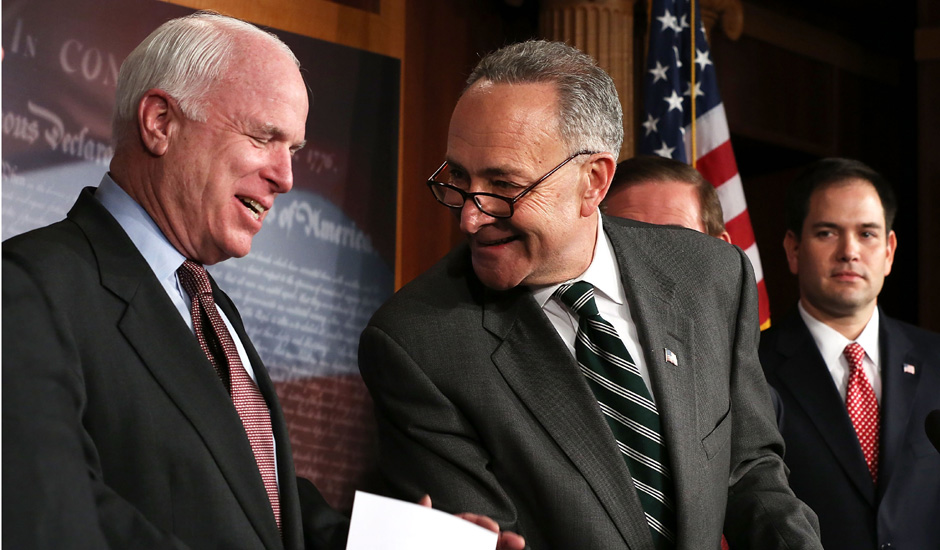 Business and labor groups reached an agreement Saturday on the specifics of a guest worker program, clearing the last major stumbling block on the road to comprehensive immigration reform.

Throughout Saturday and Sunday, reactions to the deal began pouring in from lawmakers involved in the negotiating process, with a lead Democrat projecting confidence that a bill was finally within reach, and Republicans saying they were encouraged but cautioning that a final legislative proposal has not been inked.

Sen. Chuck Schumer, D-N.Y., a member of Democratic leadership and the bipartisan "gang of eight" negotiating an immigration deal, hailed the deal on NBC's "Meet the Press," saying that after the guest worker accord between business and labor, "every major policy issue has been resolved."

In a statement last night, Schumer crowed, ""This issue has always been the dealbreaker on immigration reform, but not this time."

And in the wake of that deal, "I am optimistic that we will have an agreement between the eight of us next week," Schumer said on "Meet the Press." "I think we're on track."

"We have said we will not come to final agreement until we see all of the legislative language," Schumer noted, predicting more "little kerfuffles" on the road to a final deal, but "I expect that we're going to have agreement."

Sen. Lindsey Graham, R-S.C., another member of the bipartisan gang, told CNN's "State of the Union": "I think we've got a deal. We've got to write the legislation, but 2013, I hope, will be the year that we pass bipartisan immigration reform."

Graham predicted that an immigration bill will be able to pass the Republican house "because it secures our borders, it controls who gets a job."

The bill provides the 11 million undocumented immigrants "a pathway to citizenship," Graham said. "But it will be earned, it will be long, and it will be hard."

The South Carolina Republican also promised that the bill would prevent a third wave of illegal immigration, but said, "We're going to need the president's support" to succeed.

Sen. Marco Rubio, R-Fla., another member of the bipartisan gang who is seen as a crucial liaison to more conservative elements of the Republican caucus, said in a statement: "I'm encouraged by reports of an agreement between business groups and unions on the issue of guest workers. However, reports that the bipartisan group of eight senators have agreed on a legislative proposal are premature.

"We have made substantial progress, and I believe we will be able to agree on a legislative proposal that modernizes our legal immigration system, improves border security and enforcement and allows those here illegally to earn the chance to one day apply for permanent residency contingent upon certain triggers being met," Rubio said. "However, that legislation will only be a starting point.

"We will need a healthy public debate that includes committee hearings and the opportunity for other senators to improve our legislation with their own amendments," he explained. "In order to succeed, this process cannot be rushed or done in secret."

After Senate Judiciary Committee chairman Patrick Leahy, D-Vt., said in a letter last week to Sen. Jeff Sessions, R-Ala., that he wanted to "proceed to comprehensive immigration reform with all deliberate speed," Rubio warned Leahy in a letter on Saturday against "excessive haste."

"We owe it to the American people to get immigration reform right this time, so that future Congresses and future generations do not face the broken system we see today," Rubio wrote. "A rush to legislate, without fully considering all views and input from all senators, would be fatal to the effort of earning the public's confidence."

Sen. Jeff Flake, who spoke on "Meet the Press" after Schumer, praised the deal but echoed Rubio's call for an open, full legislative process.

"We're much closer with labor and business agreeing on this guest worker plan," Flake said, adding, "That doesn't mean we've dotted every 'i' and crossed every 't'...We've still got a ways to go in terms of looking at the language and making sure it's everything we thought it would be, but we're closer, certainly."

"We want to see this bill move through regular order," he explained. "There will be input, there should be input. It will make it a better product."