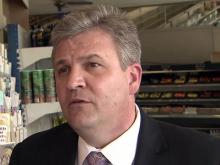 (CBS/AP) RALEIGH, N.C. -- A North Carolina lawmaker doesn't think it was right for his daughter and her third-grade class to write to him and other elected officials protesting possible cuts in state education spending.

Stone told WRAL-TV: "As I read through this (letter), anger completely shot through me, and I was trying to hold myself together. (It's unconscionable) to know any education system would use a daughter against her father."

Republican lawmakers and Democratic Gov. Beverly Perdue are at odds over the budget that is on her desk to either sign or veto. Some in education say the proposed spending plan could eliminate 9,300 positions in the public schools. Republicans have said those numbers are exaggerated.

Moss said students in other schools wrote to lawmakers and Perdue.

Stone said he vehemently disagrees, adding "I was extremely disappointed, but I tried not to show that in front of my daughter. I don't know that at any time we should use our third-grade students as lobbyists."

He went a step further on Twitter, blaming the entire political opposition, when he wrote in response to WRAL's story: "The NCAE, Democrat Party & Bev Perdue have hit a new low."

For now, Stone's daughter has provided no public comment.