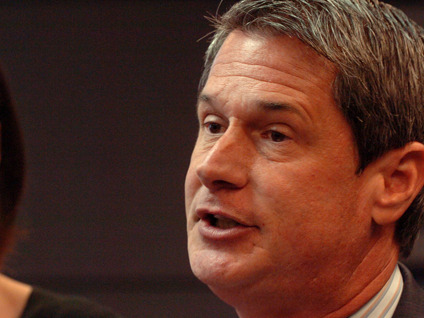 A pair of Republican senators - Louisiana's David Vitter and Kentucky's newly-elected Rand Paul - have introduced a resolution to change the Constitution so that people born on American soil do not have automatic citizenship rights.

The resolution would amend the Constitution to mandate that citizenship is only granted to a person born in the United States if "at least one parent is a legal citizen, legal immigrant, active member of the Armed Forces or a naturalized legal citizen," according to a Vitter release. The senators say their bill would close a "loophole" in the Constitution.

"For too long, our nation has seen an influx of illegal aliens entering our country at an escalating rate, and chain migration is a major contributor to this rapid increase - which is only compounded when the children of illegal aliens born in the U.S. are granted automatic citizenship," Vitter said. "Closing this loophole will not prevent them from becoming citizens, but will ensure that they have to go through the same process as anyone else who wants to become an American citizen."

Added Paul: "Citizenship is a privilege, and only those who respect our immigration laws should be allowed to enjoy its benefits. This legislation makes it necessary that everyone follow the rules, and goes through same process to become a U.S. citizen."

The 14th Amendment to the Constitution reads, in part, "All persons born or naturalized in the United States, and subject to the jurisdiction thereof, are citizens of the United States and of the State wherein they reside." Vitter and Paul maintain, however, that that does not necessarily confer citizenship on the children of illegal immigrants born on U.S. soil.

That's a view shared by Iowa Republican Rep. Steve King, who introduced birthright citizenship legislation in the House. King told Hotsheet in Novemberthat the clause "and subject to the jurisdiction thereof" means that babies born to illegal immigrants do not necessarily have constitutionally-protected citizenship rights.

Critics of the proposal, among them the Immigration Policy Center's Michele Waslin, argue thateliminating birthright citizenship "would punish the innocent children of undocumented immigrants, which flies in the face of American values." CBS News polling finds Americans split on the issue.

Republicans have become upset over what they suggest is the widespread practice of women coming to the United States illegally to have "anchor babies," a concern critics call overblown. Paul and Vitter's bill is unlikely to go anywhere in the Democrat-led Senate.

In a sign that some Republicans, who are concerned about alienating Hispanic voters, may believe the birthright citizenship push goes too far, King was denied the chairmanship of the House Judiciary Committee's immigration subcommittee in the new Congress.